Mo was too good for the likes of Blair

Hard on the heels of the death of Robin Cook comes the loss of Mo Mowlam, the most popular and charismatic politician in the New Labour firmament.

That was her problem of course. I was in the conference hall that day in 1998 when Mo got a standing ovation in the middle of Blair's speech, and I am convinced her career was doomed from that moment on.

The people around Blair were terrified of her popularity and thereafter became determined to cut her down to size.

I expand on these points in a full appreciation of Mo's career published on the thisis network of websites which can be read here
Posted by Paul Linford at 10:53 AM 1 comment:

Email ThisBlogThis!Share to TwitterShare to FacebookShare to Pinterest
Labels: Tributes

We need a fair voting system

The Electoral Reform Society has picked up on a column I wrote in the wake of the May 5 General Election about how the electoral system had once again produced a skewed result. It's good of them to include little old me in a list that contains such luminaries of political journalism as Mike White, Andy Grice and Peter Riddell. You can read it by clicking here and then scrolling down to May 14.
Posted by Paul Linford at 12:19 PM No comments: 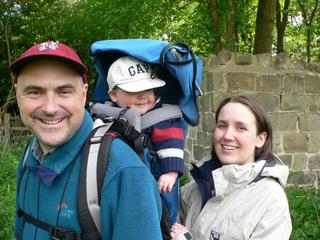 This is a picture of me, my wife Gill and son George doing one of our favourite things - going walking in Derbyshire!
Posted by Paul Linford at 1:46 PM No comments:

Robin Cook was the politician whose views probably most closely echoed my own (although he wouldn't have agreed with me about English devolution!) His death is a huge tragedy and in my view leaves a real hole at the heart of the Labour movement.

The best piece I have so far seen on this came from David Clark (a former policy adviser) in the Guardian, which can be read at the peerless Guardian Unlimited site.

My own view is that Robin would have returned to government under Gordon Brown once the great charlatan had taken his leave of No 10, probably as some kind of constitutional affairs overlord. Unlike Mr Blair, Mr Brown regards this agenda as vitally important and is understood to be considering a number of options for radical reform.

You can read my full take on Robin's career here.
Posted by Paul Linford at 11:24 AM 3 comments: