Most opinion polls tend to tell you what you already know, and to reinforce the "received wisdom" about politics and politicians. But I have to admit to being startled by one of the findings in the PoliticsHome poll on the European presidency released this afternoon.

In my own personal view, the whole appointments procedure has been a complete fiasco and we have ended up, in Herman Van Rompuy and Cathy Ashton, with a pair of complete political pygmies in the EU's two most senior roles.

Yet that is not entirely how the wider public sees it, apparently. While agreeing that the process has been undemocratic, most people are relieved that a low-profile figure such as Van Rompuy has taken the presidential job rather than a "traffic stopper" such as Tony Blair.

According to PH: "61% believe that Van Rompuy is preferable to Tony Blair as president." Isn't that just a spectacular measure of the obloquy into which the three-times election victor has now sunk?

Another missed opportunity for Brown

Time is fast running out for the Prime Minister to provide us with a good reason to re-elect him. Here's today's Journal column.


As the date of the next general election draws ever nearer, so the remaining windows of opportunity for a revival in Gordon Brown's political fortunes continue to dwindle in number.

In the calendar of set-piece political events, perhaps his best hope of an uplift came with his speech to Labour's conference seven weeks ago, but as I noted in last week's column, The Sun newspaper put paid to that.

Still to come are the pre-Budget report, the Budget itself, and the proposed TV debates with David Cameron, which could yet see the lightweight Tory leader laid out by Mr Brown’s fabled Big Clunking Fist.

But as opportunities go to set out a compelling set of reasons why Labour should remain in power for a fourth term, this week's Queen's Speech has to go down as yet another missed one.

Mr Brown's allies would claim that, with only a maximum of seven months of the current parliament to go before the election has to be held, setting out too ambitious a programme would have invited ridicule.

But surely even ridicule would have been better than the collective "so what?" from the public which seems to have greeted this timid set of proposals.

Despite the criticisms of MPs expenses watchdog Sir Christopher Kelly, it was not so much the absence of a specific piece of legislation to tackle that issue that was the problem.

As the government has pointed out, it is not clear that it requires primary legislation to sort it out anyway, and even if it does, ministers can always resort to Her Majesty's customary catch-all phrase: "Other measures will be laid before you."

No, the real problem with Wednesday's package, as with so much else the Brown government has done, is the lack of any connective tissue to tie these disparate policy threads into a 'Big Idea.'

At one time, before Mr Brown came into office, it seemed likely that the leitmotif of his premiership would be a drive to restore public trust in politics after the spin and sleaze of the Blair years.

In the end, those bright hopes were shot to pieces by a combination of the Prime Minister's timidity, the “smeargate” affair involving his adviser Damien McBride, and finally the expenses scandal.

But this should have been a cue for the government to step up the process of constitutional change, not relegate it to the backburner.

As it is, the only concrete constitutional reform pledge contained in the Queen's Speech is to abolish the absurd "by-election" for Lords' seats for hereditary peers which occurs each time one of them shuffles off this mortal coil.

The fact that hereditary peers remain in the House of Lords at all is almost - but not quite - as savage an indictment of 12 years of Labour rule as the fact that inequality has increased.

The government paid due recognition to this by having Her Majesty utter a solemn pledge to "narrow the gap between rich and poor" - but, like all the other positive measures in the Speech, it begs the doorstep response: "Why didn't you do it in the first place."

If Mr Brown does survive to lead Labour into the election next Spring, that is perhaps the hardest question he and his party will have to answer.

Regaining sympathy not the same as regaining trust

The Sun's quite disgraceful personal attacks on the Prime Minister over his letter to Jacqui Janes understandably swung some public sympathy behind him this week. But neither that nor the Glasgow North East by-election result means he is necessarily "safe." Here's today's Journal column. 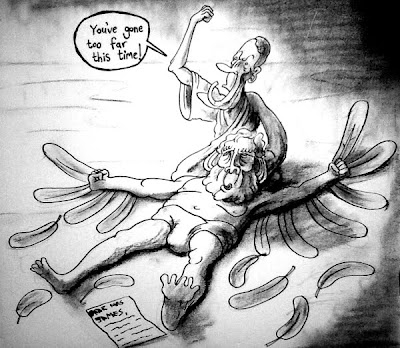 Slob returns with a reminder that you should never fly too close to The Sun. More on the red-top's little disagreement with Gordon in tomorrow's weekly column.

Posted by Paul Linford at 6:14 PM No comments:

Kelly has gone too far

Yes, MPs brought the expenses affair on themselves, and yes, the system needs to be reformed - but reforming it on the basis of a 'blood sacrifice' will not necessarily produce a better Parliament. Here's today's Journal column.


Ever since the start of the MPs expenses affair, it has been clear that no one political party has had a monopoly on sleazy behaviour.

From Tory knight Sir Peter Viggers’ duck island to Labour ex-minister Elliott Morley’s mortgage claims, the scandal has engulfed those on all sides of the political divide.

You might expect from this that the net effect of the whole debacle in terms of the opinion polls would be pretty well neutral.

But that is not in fact how the public has seen it. In fact, polls have consistently shown that the public regards Labour as far more culpable than the Tories in its handling of the affair.

In a sense, that is inevitable given that Labour is the party in power.

But of course, it didn’t, and fearful of the hostile opinion polls, the Prime Minister is now falling over himself to implement the clampdown on MPs expenses that he should have brought forward a year ago.

The net result is that Mr Brown was left with very little wriggle room once standards chief Sir Christopher Kelly had published his own recommendations on how to reform the system this week.

Mr Brown and the other party leaders have already made clear they expect MPs to implement Sir Christopher’s proposals in full – but to my mind, this is not necessarily a good thing.

At the risk of provoking a furious backlash from Journal readers, I am not sure that effectively banning most MPs from purchasing second homes does not amount to something of an over-reaction.

The statute books are full of bad legislation, hastily passed in the aftermath of a moral panic, of which the Dangerous Dogs Act of 1995 is perhaps the most notorious example.

We seem to be on the verge of making a similar mistake with MPs’ expenses, inventing rules designed to produce a ‘cathartic moment,’ or worse, a ‘blood sacrifice,’ rather than considering the most sensible system going forward.

For me, the key question is: will what is being proposed improve the quality of Parliament?

In this region, we are set to see perhaps the biggest exodus of political talent in a generation, with parliamentarians as diverse and distinguished as Jim Cousins, Alan Milburn and Chris Mullin all set to leave the Commons.

Their departures will, in my view, leave a hole in the region’s body politic that may take some years to fill.

But if on top of that, the new expenses regime causes some genuinely public-spirited individuals to conclude that they can no longer afford to represent us, it will be a sad day indeed.

My worry is that we are seeing an example the law of unintended political consequences, whereby a measure designed to clamp down on the political gravy train ends up primarily penalising MPs of no independent means.

There is a risk that we will end up with a situation in which the only people who can afford to be MPs are those rich enough to be able to buy second homes in London without the help of a mortgage.

If so, it will mean history will have come full circle since the days before the Labour Party was formed in order to provide parliamentary representation for the newly-enfranchised industrial working class.

Perhaps, at a time when Eton College seems set to regain its reputation for supplying the British ruling elite, we should not be so surprised at this.

An emotional day today as I travelled to North Wales to bid farewell to my former regional lobby friend and colleague Ian Craig. A sad occasion, for sure, but it was lovely to meet Ian's family and to see so many old faces from my Westminster days. The turnout at Trinity Presbyterian Church in Wrexham, which included one or two senior politicians as well as numerous Press Gallery figures past and present, was yet a further indication of the huge esteem in which Ian was held.

Posted by Paul Linford at 9:52 PM No comments: