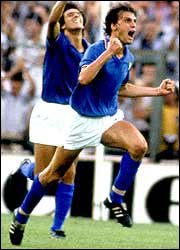 Like most fortysomethings I'm a great one for nostalgia, and at World Cup time there's nothing so nostalgic as watching all those TV replays of great World Cup goals from the past and remembering where you were and what you were doing at the time. So here, with thanks to Nick Hornby for making this sort of thing respectable, are my Top 10 World Cup Memories.

1. When Lineker Scored, 1990. From a purely footballing point of view, Italia '90 was not one of the the greatest World Cups. There was no single outstanding player to touch the likes of Pele, Cruyff and Maradona, and it was eventually won by a workmanlike German side after a terrible final against Argentina. But this was the tournament which re-ignited the British public's love affair with football, thanks to England's unlikely run to the semis and the artistry of Paul Gacoigne. I watched the semi final against Germany at the Rifleman's Arms in Belper with my then housemate David Gladwin, occasional poster on this blog and one of the best friends I will ever have in this life. Germany scored a freak goal, an Andy Brehme free-kick that struck Paul Parker and looped over Peter Shilton's head, and we began to resign ourselves to the loss of our improbable World Cup dream. And then...and then...in the 81st minute, Gary Lineker got hold of a long through-ball, held-off the German defence and squeezed the ball into the far corner. The pub went wild. More wild than any place I have ever been in my life. And though we went on to lose that penalty shoot out, it was a moment we will both savour for ever.

2. Marco Tardelli, 1982. I love the Italians and will always support them against any other team in the world except England. So when they played Germany in the 1982 final, I was desperate for them to succeed. Apart from anything else, they had beaten the best team in the tournament, Brazil, in a thrilling 3-2 encounter, while the Germans had fouled their way to a semi-final victory against France memorable chiefly for Harold Schumacher's disgraceful assault on Patrick Battiston. The final began tentatively, but when Marco Tardelli scored to put Italy 2-0 up, victory for the Azzuri was assured. Arms pumping, hair flying, the blond midfielder ran towards the touchline, his face contorted in an upwelling of pure joy. It was the finest outpouring of emotion ever seen on a football pitch, and the greatest goal celebration of all time.

3. Ballet, 1970. I was seven at the time of the time of the greatest World Cup tournament in history, and I can't say I remember having watched any of the matches from beginning to end. But as the competition went on and began to dominate more and more dinner-time conversation, I became dimly aware of everyone raving about this player whose name sounded like "belly" or "ballet" or something, and as small children do, I instantly adopted him as a hero. In the final, Brazil took on Italy and we all settled down to watch. "Ballet" scored the opening goal, a header of towering dimensions, and my interest in the game satiated, I took myself off to play in the garden, thus missing the Carlos Alberto goal that I would now rank as the greatest ever.

4. A Touch of the Cruyffs, 1974. Four years on, Brazil were a shadow of the 1970 side, and their two central defenders, Luiz Pereira and Ze Maria, were the dirtiest players I have ever seen. At the opposite end of the artistic spectrum, the Dutchman Johan Cruyff was probably the most sublime. In Holland's opening match against Uruguay he perfected the famous "Cruyff swerve," turning a hapless opponent near the dead ball line and prompting David Coleman to exclaim: "He's left him for dead!" Later, in the semi-final, Cruyff's Holland came face to face with the Brazilians, and completely destroyed them, Cruyff scoring a goal after getting on the end of a sweeping move he had initiated, and Ze Maria being deservedly sent off. Sadly they lost the final to the Germans, but Cruyff had done enough to ensure his place in World Cup history.

5. England finally catch fire, 1986. England made a farcical start to the 1986 tournament, losing 0-1 to Portugal and then drawing 1-1 with Morocco, a match in which Ray Wilkins managed to get himself sent off for throwing the ball at the referee. Bryan Robson had also been injured, so his managerial namesake Bobby had to reshape the side, teaming Peter Reid with Glenn Hoddle in central midfield, and Gary Lineker and Peter Beardsley up front. The results were instantaneous, a 3-0 victory against Poland which I watched, joyously, with my housemates at the student digs we shared in Sheffield. It was a carefree time between the end of my full-time studies and my entry into the world of full-time work. The exams were over, the sun was shining, and there was nothing to do but watch the footie and drink beer.

6. The Bridge Street hold-up, 2002. Twelve years on, and David Gladwin and myself were back in Belper and back at the Rifleman's Arms for the England v Argentina group match. England needed to win this one. A dull 1-1 draw against Sweden in the opening game had left us struggling for points with another potentially difficult game against Nigeria to come. Thankfully Argentina were not the side they had been in the Maradona years, and a scorching Michael Owen run into the box earned a penalty which David Beckham converted. There then followed the tensest hour of football watching in my life as we battled to hold onto our lead. When the whistle blew, the entire pub spilled out onto Bridge Street, temporarily halting traffic along the main A6 route through the town, but I doubt if the drivers minded much.

7. Caniggia gets his come-uppance, 1990. My choice as the funniest moment in World Cup history for all sorts of reasons. The Argentine forward Caniggia, who wore his hair a bit like the early Brigitte Bardot, had been a star of the 1986 tournament, but had lost a yard of pace by Italia ' 90 and was meat and drink for the tough Cameroonian defenders in the opening match. One of these was the aptly-named Massing, a huge defensive midfielder whose favoured method of dealing with difficult opponents was to up-end them. Eventually he sent Caniggia flying and was sent off, prompting Ron Atkinson to reveal his true colours. "I hope his mother isn't watching," said commentator Brian Moore. "She's probably up a tree somewhere," replied Big Ron. Amazingly, it was to be another 14 years before he was sacked for making racist outbursts on live TV.

8. Lorimer Strikes, 1974. My mum's family all supported Arsenal. My dad's family all supported Tottenham. So as a youngster I resolved this potentially lethal family conflict by supporting Leeds. Okay, so it was a bit like North London youngsters opportunistically supporting Man U or Chelsea today - they were the top side in the country at the time. But I embraced them with a fervour and none more so than Peter Lorimer, who played in my schoolboy position of No 7 and who had the hardest shot in the game. So when he fired Scotland into the lead against Zaire in the 1974 finals with a trademark piledriver from the edge of the area, I leapt for joy. Sadly, a virtually identical goal a year later for Leeds in the European Cup Final was disallowed for offside.

9. Tears and the Clown, 1973. Like most football crazy 11-year-olds, I was looking forward to watching England compete for the 1974 World Cup in Germany, but our hopes were shattered by the 1-1 draw against Poland in October 1973. This was really my worst World Cup memory, but it makes this list simply because it was such an unforgettable game. Time and again, England rained shots on the Poland goal only to be defied by 'keeper Jan Tomaszewski, whom Brian Clough had branded a "clown." What is forgotten is that England were effectively playing with ten men, the Tottenham centre-forward Martin Chivers having one of his frequent off-days. By the time England actually took part in a World Cup again, in 1982, my childhood was over.

10. 1966 And All That. Okay, so I don't really remember it. I was three at the time, and even though I clearly remember the TV pictures of the Aberfan coal mining disaster which took place just a matter of months later, I cannot claim to recall seeing Geoff Hurst or Martin Peters bang in any of their goals. But I do nevertheless have a very dim recollection of something happening, of neighbours' walls being thumped on, mum and dad getting excited, and people pouring out of their homes onto our little suburban street in North London to celebrate. Looking back, I think we all underestimate what a great achievement it really was, and how much we owe to "that marvellous man Alf Ramsey" as my dad called him. One day, no doubt, we'll win the thing again - but they don't make 'em like him any more.
Posted by Paul Linford at 4:09 PM

I'm sorry not to see Croatia's 3-0 demolition of Germany in the 98 World Cup in the list.

Drinking for England already then, Paul?