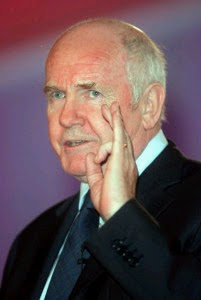 So what exactly is John Reid up to with his big speech today highlighting the need for his party to hold fast to its current political direction and demonstrate to the public that there is more to New Labour than Tony Blair.

On one level, it could be seen as almost an endorsement of Gordon Brown. He says that "personal attacks" on the Chancellor by the Tories will "rebound" and makes clear his view that Brown's achievements "tower above anything anyone in the Tory Party has ever aspired to or could ever aspire to."

If you take this comment at face value, he appears to be saying not only that Gordon is New Labour to the core, but that attempts by the Conservatives to portray him otherwise are doomed to failure.

On another level, though, the speech can clearly be read as a devilishly clever piece of duplicity, that in appearing to praise Brown he is really warning him that he will face a rival leadership bid if he so much as even thinks of lurching a millimetre to the left.

This is certainly how Brownite MP George Mudie, a former Deputy Chief Whip, has interpreted it. He said today: "I think it's an early attempt to put a marker down to get some of the Gordon Brown supporters to say 'we need a change of direction' so that he can say 'this is disloyalty to the leader and, therefore, I shall throw my hat into the ring or we shall find someone to do so'."

Mudie, who led the unsuccessful rebellion against university tuition fees in 2003, is a disappointed and disillusioned man, and some of what he says should be treated with a pinch of salt, but if this is the level of paranoia in the Brownite camp, it doesn't augur well for a smooth leadership transition.

If the Brownites genuinely believe Dr Reid is out to get their man, they should know better than to rise to his bait by putting the worst possible construction on everything.

Far better, surely, to simply throw the ball back into Reid's court by agreeing with everything he says and welcoming his very generous comments about the Chancellor's record?

This is a great blog! Is there any chance to contact you about it on your e-mail? Please let me know if you want to promote it, on my e-mail account: sylwia@lovetolead.info
Thank you!

In truth, I am both honest and clever. Obviously, I am raising my profile. It has to be said, that whilst Tony did George W Bush a favour going into Iraq, he did himself and the country no favours. A new leader and new Prime Minister of New Labour should not be judged on Tony's error of judgement.

Gordon Brown has my confidence as the Chancellor, and I would be only too happy for him to stay in that post after the leadership contest. It's as clear as Mudie what my intentions are.

Where ever I lay my hat is my Home Secretary. I am happy to throw it into the ring, before picking it up and placing it on the hatstand in the hallway of Number Ten Downing Street.

Reidmylips. I am serious. I have appointed Rab C Nesbitt as my campaign manager. In my head I can hear the song There is only one John Reid da da da dah!