Ripples do come back.... 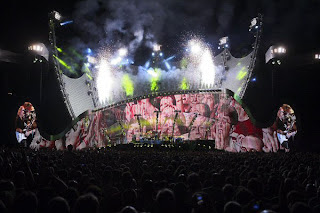 There is music, and then there is Genesis music. I've been into lots of other bands at various times in the last 44 years, but none that have engaged my emotions in quite the same way as Messrs Banks, Collins and Rutherford - and as Saturday night's comeback gig at Old Trafford showed, the old magic is still there.

Nothing is ever as good as the first time, and in terms of my Genesis experience, nothing will ever quite match the first time I saw them, but that was partly down to the company. Musically speaking, this was the best performance I have ever seen them give - and that is saying something.

It was an advantage that with no new material to perform, they could concentrate instead on crowd-pleasing. The whole show was an exercise in unashamed nostalgia, with images of their old album sleeves and old 70s long-haired photographs flashing across the giant pixilated screen at the back of the stage.

Phil Collins said in a notorious interview in 1981: "I can't expect people who liked us ten years ago to still like us today." In those days, they were trying too hard to ecsape their prog-rock roots. On Saturday, it felt for the first time as if Genesis have truly come to terms with their past

It was significant that the 24-track set featured nothing from the controversial 1981 LP Abacab, the one which alienated the old fanbase to such an extent that the band were booed at several concerts during the subsequent tour, most notoriously at Leiden, Holland.

Instead, they took us on a sentimental journey through their extensive back catalogue, with stuff dating back as far as "Firth of Fifth," from the 1973 album Selling England by the Pound, and Abacab aside, at least one track from every subsequent LP.

The set was more instrumental than usual to save Phil's voice a bit - but that was fine by me as many of the band's greatest efforts have been instrumentals. And in any case, during the "Duke's Travels" section of the "In the Cage" medley, the crowd did the singing for him.

If I have one slight criticism it is that while the merchandise featured images from the early 70s albums Foxtrot and Nursery Cryme, there was no material from these LPs performed. "Fountain of Salmacis" and "Watcher of the Skies" would have been nice additions, maybe at the expense of some the later stuff.

For me, though, the big highlight of the show was "Ripples," the haunting track from the 1976 album A Trick of the Tail. This one has not been a regular feature of their live set since the Seconds Out tour in 1977, and was the one genuinely unexpected surprise for the old fans.

"Sail away, away, ripples never come back" says the song. But as my mum once told me, new ones start.

The Genesis period that I love is that characterised by Collins singing Gabriel songs. The Seconds Out album is fantastic with "I Know What I Like", "Cinema Show", The closing sections of the "Musical Box", and "Carpet Crawl" being the real gems.

Recently, however, I have been getting into the Gabriel performances. "Watcher of the Skies", "One for the Vine", "Get Em out By Friday" and "White Mountain".

My wish, if I could arrange it, would be a live performance of "Musical Box" delivered by Collins.

I don't know if anyone has seen the current edition of Record Collector magazine, but there's an exclusive interview with Genesis...and they're still not ruling out a five-man reunion.

In fact, Phil Collins reckons that the current tour is the ideal warm-up for tackling The Lamb again...

Paul, you are a very brave person.My secret Genesis admiration only reveals itself after a bottle or two......