Why weren't expat Scots given a vote? 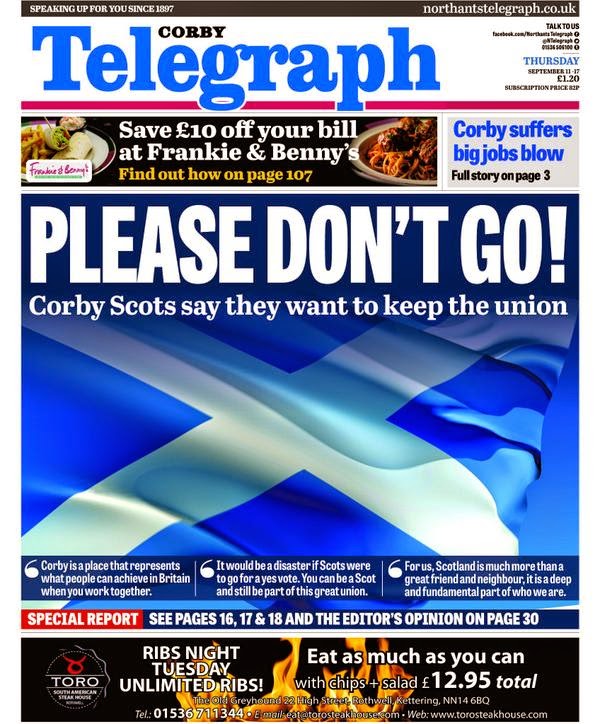 Here's a front page from the Northants Telegraph that we featured this morning on HoldtheFrontPage as part of our latest round-up of how regional newspapers are covering the independence referendum.

It's not only a great regional newspaper front page, it makes an important point about the forthcoming referendum: namely, that hundreds of thousands of Scots who now happen to be living outside Scotland do not have a vote in it.

A much fairer solution, surely, would have been to allow anyone born in Scotland who meets the age criteria for the referendum to apply for a postal vote, so long as they were able to provide documentary evidence of their place of birth.  It would also, as Mr Cameron seems to have failed to realise, have made it much less likely that there would be a 'Yes' vote.

As Prime Minister, Mr Cameron could have insisted on this course of action. Had he done so, it would have been very hard for Alex Salmond, as a Scottish Nationalist, to argue that anyone of Scottish birth should be denied a vote.

It is tactical blunders such as this that have led some people to argue that Mr Cameron's position would be untenable if, God forbid, the Scots do vote to break away.  I am afraid I am one of them.

Welcome back to blogging Paul. Though I can't agree with your post. While very many people in the rest of the UK will be affected if Scotland decided to be independent, the ones most affected would be those that live, work and pay taxes in Scotland..

Why should Tony Blair, born in Edinburgh, but someone who has lived the whole of his adult life and most of his childhood in England get a vote while the "English" Alistair Darling doesn't. Surely if someone thinks so little of their land of birth that they don't want to live there they shouldn't get a say in its future. You wouldn't say that someone born in Newcastle should get a lifetime's right to vote for Newcastle City Council would you?