Smeargate was a car crash waiting to happen 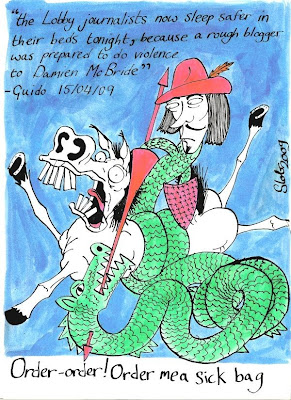 So much for cartoonist Slob's take on "Smeargate." Do I share his sense of nausea at the Adoration of the Guido that has followed the RedRag scandal and the defenestration of Damian McBride? Well, up to a point I guess.

Paul Staines is at least right in his analysis of the Lobby, although the initial diagnosis that it had become part of a client media was not Guido's, but Peter Oborne's, in his brilliant book The Triumph of the Political Class.

I myself watched it happening from close quarters and it became very obvious fairly early in my Lobby career on that you could not expect to receive help and favours from the New Labour machine if you also insisted on telling it like it was for the benefit of the readers who paid your salary.

I made my bed, and although those contemporaries of mine who took the Campbell spin subsequently saw all sorts of exciting career doors opening to them, I have never once regretted the road I took.

That said, there is a central hypocrisy at the heart of the Guido version of history that should not be overlooked. In my relatively limited personal dealings with Paul Staines, I have always found him to be an okay bloke - he even bought me a drink once - but when it comes to smear campaigns against rival politicians, his blog is the last word.

Back in 2007, Guido spent months attempting to convince his blog's many readers that Gordon Brown had been photographed on a rocking horse wearing a nappy, and to utilise the power of search engine optimisation and Google to spread this ridiculous tale across the entire internet. It even made it onto Wikipedia, and when I tried to remove it, some patsy came along and reverted my edit.

He also gave house-room to a sock puppet called "Stanislav" who suggested, in one particularly disgusting post, that the Prime Minister had been steadily driven mad by the strain of repressing his "homosexuality" over many years - part of a deadly serious attempt by the right to fix the idea of Gordon as a "weirdo" in the public's mind.

None of this in any way excuses the suggestion that David Cameron is suffering from some embarassing health complaint. But it does put it into perspective, and should serve as a corrective to those tempted to hail Guido as the new conscience of British public life.

Labour of course should have risen above all this. Instead, it set up LabourList, bringing in Derek Draper as editor despite the fact that his previous spell as a NuLab adviser had ended in embarrassing circumstances for the government. It was, in short, a car crash waiting to happen.

I disliked the idea of LabourList from the start. I was in fact invited to attend one of the breakfast sessions, and would have gone if I had been in London and at a loose end, but the whole thing seemed to me to be built on two false premises - firstly, the Dale Hypothesis that all left-wing blogs are basically crap, and secondly the Guido Hypothesis that smearing one's political opponents is a legitimate purpose of political blogging.

In other words, Labour thought they needed a Guido-style "attack blog" to take the fight to the Tories, and they concluded that none of the existing left-of-centre blogs was up to the job.

Had the party not got the first of these questions so catastrophically wrong, it would have realised that instead of trying to impose its command-and-control approach on the blogosphere, it would have been better off discreetly encouraging some of the excellent, well-established left-of-centre blogs that were already out there.

In short, instead of listening to Dolly Draper, they should have listened to Sunny Hundal. His post on Liberal Conspiracy is the best defence I have thus far read of the left-of-centre blogosphere and why Labour would have been better tapping into that rather than attempting to out-Fawkes the Tories.

Then again, New Labour has been ignoring its own natural supporters and trying to mimic the Conservatives ever since it was invented, so we should probably not be that surprised.

Meanwhile the issue of "spin" has once again become the issue that defines New Labour, the single word that I suspect will be associated with the Blair-Brown government long after everything else it did has been forgotten.

And those of us who thought Gordon would put a stop to all this nonsense have suffered another, perhaps terminal, disillusionment.

There is a huge difference between a blogger smearing a politican and the Prime minister's mate, a paid civil servant making up lies to use as smears against an opposition MP

The difficulty for the left is not so much the medium as the message, which has become forever associated with the hideously expensive, over-managed and under-performing statism that lies beneath the cracked and blemished veneer of spin.

The pity is that there were some good intentions and some good philosophy underneath at least a little of this stunt-driven hyperactivity.

It is for the non-party blogs to re-state the case for that philosophy and to do so in a manner that makes clear that careerist party hacks have no place in it. Labour needs people who have done far more than climbed greasy poles at Westminster.

Paul, I agree with most of this. Where I disagree is that I think as far as the proverbial passenger on the Clapham omnibus goes, this will redound on the whole political class, not simply on Brown or Labour

Nulab have succeeded in taking legitimate questions about Cameron off the radar, at least for now.

Is Mr & Mrs Cameroon worth £30m? If so, does that mean "call me Dave" treats is parliamentary as "spare change"? Thus making anything he comes up on "parliamentary expenses" frankly "crap"

Paul, those rocking horse story and Stanislav are not my products. They appear in the comments - of which I am not the author in all fairness. I have also said I do not believe the various versions of the rocking horse story. Stanislav the Polish plumber's much missed streams of conscience were satirical. He wasn't really a plumber by the way. He wasn't me either.

I think you would be a stronger ground concentrating on my repeated asking of the question "Is Brown Bonkers"? Only thing is, I really do think he is a bonkers weirdo.

Apparently Guido has yet to get the hang of moderator deletion.
His efforts to distance himself from those actually spreading the poison are uncannily reminiscent of our own dear Prime Minister.

Perhaps if mr stanislav were to invade a sovereign nation and butcher it's population, destroy it's infrastructure, steal it's natural resources, beggar the nation,short-change it's armed personnel, mock truth and justice, promote the inept, safeguard the misfit and the degenerate and lie consistently to the entire world he might merit your opprobrium; as it is, his vicious lampoonery, often fabulously elegant, always rythmical, inventive and cultured and very often heart-stoppingly funny is reposted all over the web, often by those whom you would consider respectable mr stanislav's crimes against humanity consist of cursing and damning the increasingly unaccountable, murderous power elites; he has never been known to deploy napalm or any of Mr Hoon's delightful fragmentation bombs - infant dismemberment being a speciality of HM Government.

Mr Fawkes' apparent solecism in describing mr stanislav's stream of conscience writing is probably quite accurate. You should go and Google The Melted Cavalryman, for instance, or else go and make your sockpuppetry claims at an army website, anonymously.

Normslly, I read Paul Linford with appreciation and admiration.

But, this article is seriously out-of-kilter in attempting to compare McBride to Stanislav.

Can you really not see the difference, Pauk?

Paul
Good post. I think Guido regularly tries to play both ends of the 'smearing' issue and ends up being not especially credible. As you will know I have long beleived Brown to be a practiced smear artist and Bower's book suggests Balls was one of his regular mouthpieces; the ST story about him and Mcbride today is all too believable.

"Paul, those rocking horse story and Stanislav are not my products. They appear in the comments - of which I am not the author in all fairness."Even if this excuse held water - and it doesn't - how do you explain commenting about it and
blogging about it?

"I have also said I do not believe the various versions of the rocking horse story."This doesn't hold water either, but even if it did you'd still have to explain your moaning about the 1986 story and how some people might react to it regardless of the truth, because there was an actual point hiding in your weak justification for bullying bloggers into silence and not allowing publication of the (pfft!) 'retraction' as you had promised.

You're not that big a fool, Staines; you're an old hand at this and you know that s**t sticks.

And I grow tired of listening to you feign outrage about other people dabbling in what you do for a living.

That Brown shows evidence of serious psychopathology is impossible to deny: it is there for all to see. Why should someone not be allowed to speculate about its cause, in his own free time, on a private blog, neither funded nor encouraged by any political party?

It is not what McBride planned to publish that is the problem, but the position from which he planned it: as an agent of the government, in government time, on a government salary and as part of a concerted political strategy.

Now if you found out that Stanislav was in fact George Galloway, it would be a different matter....

An awful lot of amateur psychiatrists around at the moment.
Mental disease is a disease, same as any other, and you need expertise to diagnose it, assess the causes, and treat it. So let's have:

1. Your medical qualifications
2. The clinical definition of "serious psychopathology" and how, incidentally, you distinguish it from "mild psychopathology"
3. Your diagnostic evidence for your verdict on Brown. ("He employed a nasty man to do his dirty work for him" won't cut it)
4. Your opinion on the relative influences of genetic and environmental factors in triggering the disease.

Rouse, mate, psychopathology simply means psychological abnormality or malfunction: it does not imply an aetiology. It needs qualifications to detect no more than having your arm broken in two needs an orthopaedic surgeon to detect: it is plain for all to see.

Similarly, I do not have to be an expert in semantics to see that you've missed the irony in your post (for your amateur status is betrayed by the silliness of your points).

But Stephen is right, nevertheless, to point out that while unsubstantiated speculation about whether or not a senior politician has ever suffered from gonorrhoea is rightly regarded as a smear, unsubtantiated speculation about a politician's mental health is regarded as fair game. Guido of course is not the first person to do this; thanks to Mr Rawnsley, we know that
someone "with a very good claim to know the mind of [Tony Blair]" also questioned Gordon Brown's psychological state. Years later the same spin doctor let it be known that Mo Mowlam had gone bonkers. Character assassination of this type is a well-worn political technique, but it is no less odious for that.