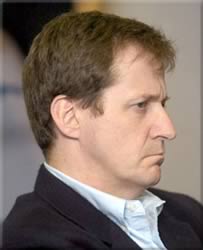 Contrary to what some people might think, I have some degree of respect for Alastair Campbell. Whether or not you agree with his methods - and I was on the wrong end of them for seven years - the way in which he overcame serious mental health problems in his late 20s and went on to have a highly effective career in government can be seen as an inspiration to others in similarly dire straits.

So it was not susprising that the Independent on Sunday chose an interview with Campbell as the centrepiece of a special edition yesterday highlighting the issue of mental health.

Looked at solely in that context, it was a decent piece of journalism. But in the wider political context, the problem with the IoS piece was that it allowed Campbell to present a completely disingenuous and self-serving account of the David Kelly affair.

In the interview, Campbell admits that the death of Dr Kelly was his "worst day" - and how his experience of a crippling breakdown in his 20s helped him to cope. He said: "It [the Hutton saga] was one of those episodes where things spiralled out of control... I felt completely confident in relation to the facts but during the whole period it was a nightmare. And you are thinking, 'There's this guy for whom it's been such a nightmare he's killed himself'."

Read like that, he almost makes it sound like they were all in it together, that Campbell, like Kelly, was a victim of a process over which none of them, least of all the spin doctor himself, had any control. The facts, as related in Campbell's evidence to the Hutton Inquiry and in his own diaries, are rather different.

Far from having sympathy for the plight of the MoD weapons expert, Campbell wanted his name out in the public domain because, as he so poetically put it, it would "fuck Gilligan" - as in Andrew Gilligan, author of the controversial BBC story which claimed the "dodgy dossier" on Iraqi weapons had been "sexed up."

As well as that one infamous phrase, the Campbell diaries also reveal that "GH (Geoff Hoon) and I both wanted to get the source up but TB was nervous about it," and that he and Hoon "felt we should get it out through the papers then have a line to respond."

In other words, Campbell tried his damnedest to ensure Dr Kelly's exposure, and despite being initially overruled by Tony Blair, in the end he got his way.

In his IoS interview, Campbell describes his original breakdown as having been brought on by work, drink and pressure at a time when he was in a job for which he was psychologically unsuited. Interestingly, at no stage does he mention guilt.

Is it not ironic that someone who displays such self-knowledge about what drove him to a "psychotic" breakdown at the age of 28 can fail to show the slightest understanding of his own role in a tragedy in which someone else was ultimately driven to take his own life?

I didn't have time to read the article yesterday, but did raise my eyebrows when I saw it on the front cover.
I ran the media operation at the RCJ for the Hutton Inquiry and watched the various contributors to Lord Hutton's body of evidence.
Butter wouldn't have melted!
The Kelly affair was a decade of Campbell's tactics writ large
Shameful.

Exactly Paul. I read that total, total bollocks and got very, very depressed.

Spot on Paul. I also think the same regarding Ali's complacent attitude towards the dossier. The Butler report, which gives before and after versions of the draft shows the changes made by number 10 significantly changed the sense of what was being offered as justification for going to war. But I also agree his honesty regarding his condition was admirable and brave to a degree.

To my mind, this remains one of the darkest moments of modern Government.

On the face of it, the real guilty men were the senior Civil Servants at the MoD who allowed a man of principle to be atomised when they should have protected him.

The best I can say for these deeply disingenuous individuals is that they felt cowed by the poisonous environment that the vile Campbell had been instrumental in creating.

I won't defend Campbell's behaviour throughout the Kelly affair but from a psychological point of view his retrospective take on the whole episode as a random outcome of process is probably a protection mechanism.