Actually I'm not sure it really was...but here's Slob's take on it anyway.... 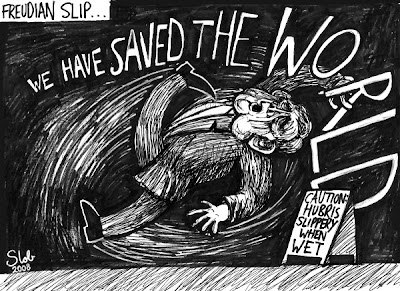 Other sayings which Prime Ministers may have come to regret:

"Most people who know me know that I'm a pretty straight kind of guy." Tony Blair.

"I don't think other people in the world would necessarily take the view that there is mounting chaos." [translated by The Sun as "Crisis? What Crisis?"] Jim Callaghan

"[Devaluation] means the pound is now worth 14pc less on the foreign exchanges. It does not mean that the pound in your pocket or in your purse or in your bank has been devalued." Harold Wilson

"Most people in this country know they've never had it so good." Harold Macmillan

"I bring you peace in our time." Neville Chamberlain

"Psst...wanna buy a peerage?" David Lloyd George (okay I made this one up.)

Shurely some mistake on the MacMillan quote? It was actually true - or can you tell me different?

"I would just like to remember some words of St Francis of Assisi...where there is discord, may we bring harmony..."
Except they weren't by St Francis and she didn't bring anything of the kind. At least the other guys waited until they were actually inside Number 10 before they started misleading us.