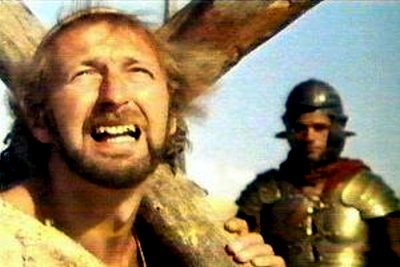 Here's an image that many Christians find offensive. It depicts the late Graham Chapman playing Brian, a spoof on our Lord and Saviour Jesus Christ in the film Monty Python's Life of Brian. It is part of a long tradition of religious satire ranging from the doddery vicar in Dad's Army to Father Ted and the Vicar of Dibley. Christians, it seems, have always been considered fair game when it comes to humour.

Sadly, Chapman is now dead. I could go out on the streets waving a placard and calling for the other perpetrators of this image - Terry Jones, Terry Gilliam, Michael Palin, Eric Idle and John Cleese - to be executed. But I'm not going to, because I happen to believe that the ability to poke fun at religion - or anything else - is an essential democratic freedom. And because even Christians need to be able to laugh at themselves.

February 7 update: Andrew Milloy has kindly sent me some more images which you would presumably never see in Arab newspapers. To view them, click here.
Posted by Paul Linford at 9:25 AM

Email ThisBlogThis!Share to TwitterShare to FacebookShare to Pinterest
Labels: Christianity

Sorry to be a pedant but the film makes it quite clear that Brian is not Jesus. Jesus is portrayed in the film, briefly, giving the Sermon on the Mount. I think he's played by Kenneth Colley, but I'm not sure.

Pedantry over with, I agree with your point, that it is essential to preserve the freedom to make fun of religion. As a Christian, I have mixed feelings about the Life of Brian. On the whole I think it's a great film, as for the most part it satirises man-made religion rather than Christianity itself (a point that could be made about Father Ted and most other TV vicars as well). However, I find the final scene offensive, as by trivialising the suffering of crucifixion in general it trivialises the sacrifice of Jesus' death. But the fact that I find it offensive does not mean that it should be banned, or that I should call for the death of the Monty Python team.

Was the first post so offensive that it had to be removed?

Were you the blogger4Chris that faked YouGov figures on the politicalbetting and Guido blogs to try and give him a false impression of momentum?

No, the truth is rather more prosaic I'm afraid! Matt H. had posted a comment which corrected one or two inaccuracies in my original post so I then edited my orginal post to reflect this. That then rendered Matt's comment meaningless so I deleted it and recreated the relevant bits of it as a new post.

I've now enabled comment moderation so I don't have to go through this rigmarole again the nexr time I get something wrong!

Paul, we seem to live in a society that is cynical about religious beliefs and increasingly the moral axioms that derive from them. Universal truths and things that were once deemed sacred are under constant daily attack. I think we see that in family life and marriage as well as anything else traditional or Christian which are soft targets. It seems that only the highly vocal pressure groups get the spotlight, sometimes hijacking the moral consensus that exists in general society (approx 70% of the UK according to the recent BBC poll held the view that a society based on Christian values should be retained). There seems a problem therefore that our society lacks the fundamental cohesiveness, to enact its will on matters of culture and counter-culture and one has to question whether the ideology that underpins our version of multiculturalism is actually up to the job of preserving our national freedoms when so little of it is mandated in either civic values or public affirmation.

This latest drama is a reminder of the tolerance that Christians do have living in Britain. Jesus in a nappy, for instance (Jerry the Op) was publicly funded, and continues to be marketed beyond commerciality, despite widespread distaste. Christians, on the whole, are not reactionary and do not use scripture to justify violence or retaliation. This contrasts with (at least the public vociferousness of) Islam quite markedly. I think though that this last week may have seen a turning point of the opinion even in the most socially 'progressive' elements of the press, that the liberties we take foregranted are far from secure.

Life of Brian still makes me laugh, and I hope the good Lord has a sense of humour :-) There are many sketches that now seem quite prescient . . .

Anonymous, no I haven't faked any YouGov polls lately, and if you are going to accuse me of such things you might at least have the decency to reveal your name!

I note that another poll this morning has Chris Huhne on top with 38pc, so he certainly doesn't need me to create momentum!