English knives out for Brown 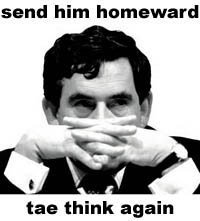 According to Charlie Clarke and others, Gordon Brown is now virtually "Joint Prime Minister" with Tony Blair, though as he perfectly well knows, in our system of government such an idea is a constitutional nonsense.

The more of this sort of thing I hear, the more I am tending to the view that Brown is being set up by the Blairites - an idea I explored in a previous post last week and may well return to....

Meanwhile, supporters of the Campaign for an English Parliament, of which I am also a supporter, have launched a campaign to stop Gordon Brown becoming Prime Minister on the grounds that, as a Scot, he has no mandate in England.

This image of Gordon Brown currently appears on the CEP newsblog, along with a lengthy comment from me and response from the blog's author, Gareth Young.

Although I support the CEP's overall aims I think there is a rather unpleasant and personal overtone to this campaign. It doesn't seem so very far away from the sort of "send the buggers home" saloon-bar racism which still exists in some inner-city areas where racial tensions are high.

Gareth's argument is that until we have an English Parliament, we can't have a Scottish Prime Minister of the whole of the UK, but this seems a bizarre point of view to take if Gordon is the best candidate for PM in all other respects.

That said, Gordon could stop this sort of sabre-rattling in its tracks by saying a bit more about how he plans to tackle the West Lothian Question if and when he finally does become Prime Minister.

As I have said on previous posts, one of the opposition parties is going to come out in favour of an English Parliament before too long, because the status quo simply cannot be justified. Brown should pre-empt them by promising an English Constitutional Convention to look at the whole issue in the round.

February 16 update: More hostile comment on this post can be found at the CEP Cambs blog and The England Project. Some posters on CEP Cambs seem to think I am some kind of wealthy academic stuck in my ivory tower - if only they knew!
Posted by Paul Linford at 11:56 AM

I commend you for picking up on this point. I have seen various arguments presented under the guise of the "campaign for an English parliament", which is a perfectly laudable cause which we should all be thinking about, which are purely and simply anti-Scottish, just for the sake of it. I say to them: stick to the argument.

Look at this in context - the British government spends over 80% of its time dealing with matters that affect only England. They are prevented from dealing with most things in Scotland as the day-to-day running of the country is handled by the devolved Scottish Parliament.

Most of what Gordon Brown as Prime Minister would do would not affect the people in his own constituency. Because of devolution, his job would almost exclusively revolve around England. No English person can vote him out of office as his constituency is in Scotland. Most of what he will do doesn't affect his constituents so the chance of him messing up in their eyes and subsequently being voted out of office has got to be about as likely as John Prescott winning Weightwatchers Slimmer of the Year award.

I think Gareth is right. Until there is an English Parliament, a Prime Minister from a Scottish constituency should be resisted. We need at least the same representation and access to democracy as the rest of the UK before we should submit to Scottish rule.

I am not a paid up member of the CEP but totally support their aim. To compare their campaign to a form of 'saloon-bar racism' is missing the mark by a long way. Yes - they are openly critical of both Scottish and Welsh MPs having a say on English only policy and may sometimes sound intolerant in their remarks. But they give equal criticism to English establishment figures who publicly support the current situation and are dismissive of the imbalance.

The simple fact is that devolution was the brainchild of the current Blair government, top-heavy as it is, with Scottish and Welsh cabinet members. It was they that gave Scotland and Wales these powers and left England out of the democratic mix and they that have never sought the opinion of the English people. Would an English-biased cabinet have done the same?

I support the CEP because they are a lone voice calling for equality. Personally, I was happy with the Union but having had this lopsided mess forced upon us I want to see the job finished and finished properly. If David Cameron and 'New Tory' pledged tomorrow that they would finish it, then they might well get my vote next time around for the first time. What I do know, is that Gordon Blair wont.

Sometimes it is best to lete the politicians speak for themselves. This extract from Hansard puts my case perfectly and simply.

Earl of Glasgow: Is the noble Lord, Lord Baker of Dorking, seriously suggesting that a cabinet minister - no, let us go further: a future Prime Minister - will be unable to speak or vote on important English matters because his constiuency happens to be in Scotland?

Lord Baker: My Lords, Tony Blair cannot vote on any matters devolved to the Scottish Parliament. He cannot even ask or answer Questions on such matters.

If it's 'anti-Scottish' or 'racist' to be opposed to this iniquity then so be it, I will proudly bear those epithets in the name of democracy. In many cases that is what the argument against us is reduced to now, logic has gone out of the window.

Too good to be too Scottish.

I applaud the CEP for fighting for equality for England and its people. The English and Scots are not separate races anyway, so it is ridiculous to talk of "racism".
Too many PC people, like Mr Linford, up there in their comfortable ivory towers, spout nonsense about "racism" - it is a word which loses its weight when applied inappropriately. Mr Linford, please do not trivialise such an important word.

I don't want to split hairs but what I said was it doesn't seem so very far away from....saloon-bar racism. In other words, not racism, but carrying some overtones of it.

I am grateful to all those who have replied, and it implies that unlike Gareth I don't necessarily know my audience on this blog! Feel free to keep the comments coming anyway.

I think that the link from the England Project may be sending a pro-English crowd here so I wouldn't necessarily take the views as representative.

For the record I wasn't accusing you (Paul) of using the term 'racist' with reckless abandon - but it has been done before which is why I like to come out strongly in defense against it.

If you knew me personally then you would realise that the anti-Scottish accusation is like water off a duck's back. I lived in Scotland for five years and even allowed some of the blighters to come all the way to Canada to attend my wedding in their silly costumes. Yes, to steal a cliche, some of my best friends are...... The vast majority of those Scottish friends read my CEP and Toque blogs as well, and most of them agree with me.

You can try and look at it this way - maybe we are doing Brown a favour by highlighting this issue. It may not be such an issue now but when he becomes leader, which I still think he will, it will become a stick with which to beat him regardless of whether he is a good Prime Minister or not.

Oh no. I have a demographic!

Anything 'English' gets racism thrown at it.. Oh well just another one. Sigh

The best comment I heard before devolution was that independence was a matter for Scotland but devolution was a matter for Britain. Sadly that common sense was never applied and English people have never been asked for their opinion. I would certainly never vote for a PM who sat for a Scottish contituency no matter who he was, it is just too unfair.

When in God's name did anyone last see a saloon bar ? The saloon bar - a place where men wore tie and ladies drank halves, is gone, vanished, defunct. It vanished with Respectable England. We are all trainer wearers now.

Even people like Aaronovitch who should know better use this tired cliche. It died around the same time as Mary Whitehouse (peace be upon her).

Paul - I entirely agree with the points you make. Far too much of the CEP site's content seems to be motivated by fervent anti-Scottishness rather than considered opinion. There's quite a nasty under-current and to take issue, even mildly, with their views results in a barrage of hostile responses and in my case, my posts being censored and banned.

As they didn't care to respond, perhaps given your previous pro-regional views you might like to expand on how a region like the North East might stand to gain from an English Parliament dominated by the interests of London and the SE (i.e. the status quo), as I've yet to hear this explained by the pro-EPers ;)

Inamicus - this is such a good question I've replied to it in a separate post.

Play fair now Inamicus. I did not censor your comments or ban you from posting. I closed down the comments on one post after people insulted you, and after you insulted me.

Passions run high on the CEP blog and I have to walk a fine line between the right to reply and insulting language.

For what it is worth I have replied to Paul's post.

And from what I remember we had a quite civil email conversation where I explained my decision and you gratiously accepted it.

Whilst the nationality of the PM should not be an issue, the constituency of the PM most certainly is, post-devolution. I am aware Blair is Scottish, but he was elected in England. Brown was not. He is democratically unaccountable to the people he rules over and that is a national disgrace and ought to be a cause for great shame to New Labour - and the rest of them who think that democracy is slight issue, not to be taken seriously.
Until England gets its own Parliament, with equal devolution and equal funding to Scotland, then the English Question will continue to fester.
As long as Gordon Brown's constituents get certain free NHS services, certain cancer drugs, free national travel for their elderly, free personal care for their elderly and higher funding for transport and everything else, then I will never accept him as my ruler.
You would shouting from the rooftops if the word English was replaced with any other nationality.
This situation is of Brown's own making. If he doesn't like it, he should take a long, hard look in the mirror. It will not be a pretty sight, seeing a nasty, discriminating racist staring back at him!