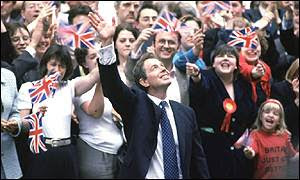 Well, I was, but with the hacks on the other side of the street rather than the cheering crowds pictured here.


It was possibly the craziest day of my entire working life. I had gone up to Newcastle the day before to cover the election for my paper, The Journal, and worked through the night with colleagues to produce our election special edition. At 6am I got on the London train, arriving back in my office in the Press Gallery at 9.30am. Then it was off to Downing Street to hear John Major's graceful exit. At that stage I reckoned I would be at work at least another 8-9 hours, so I envied him being able to go off and watch cricket on such a beautiful day.

Eventually the new Prime Minister arrived in triumph, having kissed hands at the Palace minutes earlier. "I should tell you that earlier this morning, I was invited by Her Majesty the Queen to form a government," he informed us in a slightly self-deprecating way, before going on to make his much-parodied statement about governing as old Tories New Labour. He also paid a generous tribute to Major, triggering a minor outbreak of booing among the more graceless (and less choreographed) elements of the cheering crowd.

By mid-afternoon, the details of the first Cabinet appointments were emerging and by 5am we were back at No 10 for the new government's first Lobby briefing. Alastair Campbell strode in to the basement room to general cheering from the hacks, who still, at that stage, regarded him as one of them. Asked how the new Prime Minister felt, he replied: "He realises that he has been given a remarkable opportunity to unite the country." It was a phrase that has always stuck in my mind.

I finally arrived back at my flat in Islington that night at 8pm, having had no sleep for 36 hours except for a few snatched moments on the train. It had been hugely satisfying, if rather exhausting, to have watched history unfolding at such close quarters, though not an experience I necessarily wanted to repeat. But of course, four years later, in June 2001, I did!

I didn't realise you were there Paul. Is it right that the cheering crowds were in fact stooges bussed in from Labour Central Casting?

I went to school with Tony Blair and I've spent much time trying to puzzle out how such a normal, happy and well-adjusted guy got involved with the Iraq debacle, secret loans etc. The prep school that we attended was very patriotic and imperialistic and maybe some of this influence rubbed off, even though at the time I remember Tony being quite anti-establishment and making fun of the whole thing. The Blairs were of course very Tory and perhaps Tony in middle age is reverting to his dad’s beliefs. I certainly find his passion for independent trust schools/academies intriguing and I wonder if he subconsciously wants everyone share in the Hogwarts-type experience of our early days. Maybe when the memoirs are written it will all become clearer.

Capt Spaulding - very interesting stuff. Thanks for sharing it on this blog.

Stephen - I expect so, but nothing was ever proved.