The Brits Ain't What They Used To Be 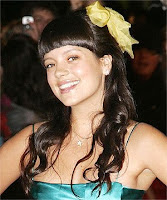 I have to admit to being slightly disappointed by the outcome of this year's Brit Awards, not just because sparkling Lily Allen (pictured) lost out to dreary Amy Whinehouse for Best British Female, but also because that the ceremony failed to live up to its past reputation for cock-ups and general bad behaviour.

Everything seemed terribly polite and well behaved compared to, say, John Prescott having a bucket of water emptied over his head by Chumbawamba*, Jarvis Cocker invading the stage during Michael Jackson's Earth Song, the KLF dumping a dead sheep outside the ceremony (their original plan having been to slice it open on stage), and Lisa Stansfield's rant against the first Gulf War in 1991.

Perhaps my favourite memory, though, was Sporty Spice Melanie Chisholm telling the loathsome Liam Gallagher to "come and have a go if you think you're hard enough" from the podium after he criticised the Spice Girls in 1997.

Eat your heart our, Arctic Monkeys and Co. They don't make pop stars like that any more.

*Token Political Reference for those who get annoyed by my occasional descents into "trash blogging."
**Hat Tip: Giles C

I'm with you on the Lily Allen front Paul.
Her album is fabulous (apart from track 2) and its the first time I have listened to any new music quite as obsessively for a very long time.

Noel Gallagher is trying to make up for a lack of controversy this morning. He's not far off the mark either.

Yes, Paul, you're right. I don't think nostagia's what it used to be either.

...but why do people still sit in front of awards ceremonies and expect them to be anything more than a showcase for what the industry wants you to buy this year?

David's right of course. The reason Lily Allen didn't win is because everyone bought her album last summer, and now the industry wants us all to buy Amy's.

...and that single by Amy Winehouse really does sound like Abracadabra by the Steve Miller Band.