That petition, and some other ways to cut congestion 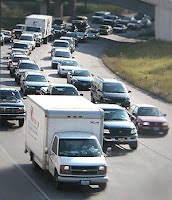 The last time I posted anything on road pricing, I was urged to "get a grip" by esteemed blogger Tim Worstall who reckoned I was paying insufficient attention to the "polluter pays" principle. Fair cop, guv, but what I was really seeking to point out was merely that the Government had paid the public transport network insufficient attention during its 10 years in power.

I didn't, in fact, sign the Downing Street petition against road pricing which has caused all the kerfuffle, for the simple reason that I think it could be part of the solution to the congestion in some large cities. But I don't support a national road pricing scheme for much the same reason I don't support ID cards - it could only work with the imposition of "spy in the cab" technology which would give the Government even more knowledge about, and therefore power over, our movements.

There are to my mind much more practical and far less politically problematic ways to cut congestion, and I will name two here. First, by radically improving school bus transport to remove the need for "school runs." When I were a lad, we all either got the bus to school or walked. If your parents gave you a lift you were a poof, which in those days was a general term of abuse directed towards the pampered or effete as opposed to the homophobic bullying it would be viewed as today.

The second is by encouraging a major growth in working from home. This is, of course, supposed to be how we are all going to work in future, but as a matter of fact, a lot of companies don't encourage it, mainly due to worries about people's laptops being invaded by computer viruses which they then bring with them into the office. Maybe a few tax breaks here and there might force them to reconsider.

The answer to road congestion is that this government should have invested money in the whole transport infrastructure.
They have been more than happy to take all the extra tax revenues generated by the growth in more vehicles.
But very little of it has been put back into the transport needs.
All we have had is the suggestion of using the hard shoulder. Plus a toll road in the Midlands.
If they would fix things first, I might support road charging.
The present suggestions are only to get them out of the mess they have made.

Encourage home working? Why? 20 years ago neither you nor I worked from home, nor could anyone in our positions have hoped to do so. Now we both do so. Sure, these things take time but give it a few more decades and we'll all be wondering what commuting was (along with our silver foil suits and personal jets).
Of course, "a few more tax breakis" at present: well, you do know that El Gordo just abolished one for companies that provide their workers with home computers?

Tim, I hardly ever work from home as it has happens. But thanks for drawing my attention to the home computers tax break point - that is sheer lunacy on Brown's part and deserves a wider audience.

I think that tax break was to encourage more people to buy computers and therefore for kids and adults to pick up new skills and allow more kids access at home to meet some targets. When it was introduced there was a push for home PC ownership. Of course Gordo decided that as they can't educate people when they are locked in a classroom there wasn't much chance at home or something.

The bit that annoys me is that for decades we have paid into the road scheme. They paid out the minimum they could and then have the cheek to blame us for using what we are paying over the odds for. They then say that the roads we have paid for we also have to rent from them by usage. I know as it's the government it isn't called fraud and robbery but it should be.

I work a lot from home and most firms that allow this also supply the tools necessary. It doesn't require anything from Gordo which is just as well.

btw: Time, you don't half get around. How you find the time is beyond me.

Interesting, isn't it, how an entire debate has been driven (if you'll excuse the pun) by people in London paying more to enter the abysmal hell-hole.

I've been having a good laugh at the pieces planted on Comment is Free at the council taxpayer's expense by the PR team employed to represent Ken 'I post but don't respond' Livingstone, someone who loves a good debate provided it ends after he has spoken.

What I haven't been having a good laugh at is the utter balls the Government has made of transport. Roads? Widen motorways, but otherwise make people 'compete' for investment. And then re-classify the strategic importance of routes if it looks like a big bill's coming along. Rail? Dont invest in the infrastructure so people ignore the service. Then change the minimum service standards for franchises because 'they're so poorly supported anyway'. Traffic management? Allow councils to pursue their anti-car agenda by introducing 'safety' measures and 'mass transit' lanes that make what little space there is more congested than ever (landing UK plc with a whoppingly uncompetitive communications system). That's wqithout even mentioning road safety, where trained, experienced traffic police have been replaced by cheap dimwits (the Highways Agency) and tax cameras (Road 'Safety' Partnerships).

And still Gordon's only 13% behind in the polls. They must be right.

The vast majority of people who signed that petition were objecting to the violation of privacy and their freedom contained in the method of charging rather than the charging itself.

Toll roads paid by the journey via toll booths are fine. The French system works a treat.
Furthermore, it appeals to a certain level of British snobbishness. Just like private schools and private hospitals, you are paying to escape the masses and British people love doing that.