...but Gordon's Government maybe can. 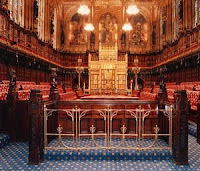 It is a savage indictment of the Blair Government's loss of reforming nerve that it has taken them 10 years to come up with a plan for a 50pc elected Second Chamber. But such is its shortage of political capital that even implementing this timid proposal is likely to prove beyond it.

The next Government, though, will have much more of such capital to expend, and if he becomes Prime Minister, Gordon Brown should make it clear from the start that he intends to go the whole hog and bring in a fuly democratically-elected upper House, and that this will be a Labour manifesto commitment at the next election.

There is no place in a modern legislature for hereditary peers who owe their titles to some past royal service or liaison. No place for bishops who no longer even believe in the God they purport to worship. No place for appointed party placemen and timeserver ex-MPs. And no place either for so-called "representatives" of ethnic communities who are often those with the loudest voices rather than the broadest level of support.

There is, I grant you, a case for involving "experts" from the world of science and academia, of which Lord (Robert) Winston is a good example. But there is no reason why any of those people should not be co-opted as non-voting advisers onto Lords Committees scrutinising legislation without actually making them voting members of the upper House.

But a fully-elected Second Chamber would not only be right in principle, it would also make good politics. By coming out for a 100pc elected Chamber, and making this a manfesto commitment, Brown will accomplish three things.

First, it will give him the necessary authority, under the Salsibury Convention, to push through a fully-elected Second Chamber after the next election irrespective of the inevitable opposition from the peers themselves. Second, it will prevent David Cameron outflanking him on the left by himself coming out in favour of 100pc election.

But thirdly, and best of all, it will enable Brown to draw a line under the sleazy Blair years at a stroke by removing the right of future Prime Ministers to abuse the Parliamentary process by awarding peerages to their political cronies in the way Blair has done.

Indeed, since everyone except John "fucking" Hutton and Charlie "no trousers" Clarke now accept he is going to be the next PM, there is surely nothing to stop Brown coming out and saying all this right away.

Whilst I understand your assertion that hereditary peers have no place, I think I disagree.

The major problem with our political system - as I see it - is that in order to gain power it seems necessary to pay more attention to watching your back, than representing the constituents who elected you. The members of parliament have to compromise their beliefs in order to satisfy their party and keep their position.

To introduce this conflict of interest into the last bastion against dictatorship would be, I believe, a dangerous move.