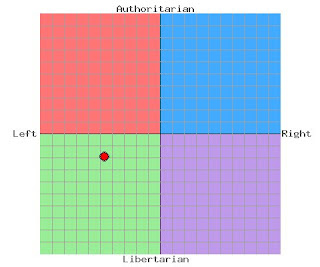 Or at least so says the Political Compass website which places me firmly on the left of the economic debate and slightly south of the libertarian-authoritarian divide. I've no idea what voluntary regional collectivism is - I suspect it's a sort of cross between libertarian socialism and anarcho-syndicalism but let's not get bogged down by labels. Interestingly the international figure to whose views mine come closest, according to the site, is Nelson Mandela, which can't be bad.

I was tagged to do this by South Tyneside's only Tory, Curly of Corner Shop fame, for which thanks. I'm not going to tag anyone else because this one has been round the block a few times already, but if anyone wants to have a go and let me know how they got on in the comments, feel free.

Same position as you, only I was a little more to the centre

I remember sending you a link to this one a few years ago, Paul, but it's nice to see that it's still there.

So I'm down there on my own again. Plenty of famous names at 1.00 on the Left/Right axis, but it doesn't half thin out in that Libertarian Right quadrant!

If you add it as a Facebook application you can see where all your friends in Facebook are plotted... Quite amusing.

What they neglect to realise is that the actual left-right axis runs from the bottom left to the top right, with authoritarian lefties and libertarian righties being aberrations.