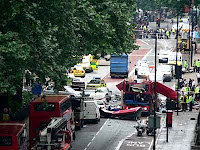 My attention has been drawn to an excellent but extremely disturbing post on Rachel from North London today predicting some potentially shattering forthcoming revelations with regard to the use of intelligence prior to the 7/7 bombings. Apparently this has been known about within media circles for some time but kept secret because the whole thing is sub judice.

Writes Rachel: "There is one hell of a tidal wave coming, as secrets that have been hidden for too long start to emerge."

Obviously I can't add any information of my own at this stage, other than to make the comment that if the contents of her post are even half-way true, then there are going to be such serious questions asked of our political masters that the case for a public inquiry into the bombings will become unanswerable.

Davide Simonetti has taken advantage of the Downing Street e-petition initiative to lodge one in support of an inquiry, and you can sign it HERE.

Update: Sorry to have to impose comment moderation last night but someone took this post as an invitation to openly speculate on the nature of the forthcoming story in a way that specifically linked it to a named ongoing criminal trial. Since I don't especially want to be accused of prejudicing a court case that might result in people who tried to kill hundreds of other people being locked up, I took it down.

Email ThisBlogThis!Share to TwitterShare to FacebookShare to Pinterest
Labels: Terrorism

Thanks very much for the link Paul

I was really interested to read your blog Rachel (thanks for alerting us Paul). Best of luck in getting an inquiry.

Paul, have I not been consistently saying that Tony Blair knew full well. Whether he ordered it or just condoned it, the latter more likely, it's still just as bad.

I support what Rachel is trying to do and wish her well. I have, of course, signed the petition.

Sorry to encroach on such a worthy blog, but would you mind just looking at the following:

From what I’ve read on some political blogs, Tony Blair is going to sign a document on 25th March that will sign the UK up to what is, effectively, an EU ‘constitution.’ It would appear that once signed, there is no way that we can get out of it. They are calling this document a ‘treaty’, but as far as I can ascertain it is a re-worded version of the EU constitution.

Tony Blair is intending do this without either a debate in Parliament or a referendum. I do not want him to be allowed to proceed on this basis. I think a petition at his famous website would be a good idea, but I do not have the relevant expertise to instigate it correctly (necessary legal wording, etc). Would someone else more competent in this area please proceed with urgency? I would also suggest petitioning your MP!

OK guys what's this all about?

Is Rachel suggesting there was a cover-up of some description?

I don't know Rachelnorthlondon at all - and only very occasionally read her blog. I'm also conscious that she has experienced something I very much hope nobody close to me ever has to go through.

And on this issue she may well be a totally reasoned sensible person who happens to know something I don't.

But I do get a bit worried when people say stuff like "I know the truth, it's really really bad, but I can't tell you what it is, watch this space".

It's not that it isn't sometimes true when people say that. It's just that it often isn't all that it's cracked up to be. "This revelation, when it comes out, will blow the establishment apart" is something even I, in only a few years hanging around political people have heard with alarming regularity.

The establishment is yet to be blown apart.

Is that because they always conspire to stitch things up? maybe. Is it because, in reality, these stories are juicy when they aren't in the public domain precisely because they aren't. But when they come out they just don't seem all that astounding?

It's at very least a bit of both.

Rachel everyone's quoting you:
http://ollysonions.blogspot.com/2007/03/future-looks-bright-for-conspiracy.html
EVERYONE IS SAYING IT WAS A CONSPIRACY