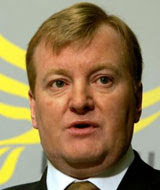 A work colleague draws my attention to an interesting snippet on the Derby County FC Rams Forum that former Lib Dem leader Charles Kennedy has been seen at Pride Park in recent weeks. We could certainly do with the support of a few big names as they have been few and far between since Cap'n Bob went overboard.


[*For the benefit of the puzzled, and other non Ossie Enders, Derby County FC used to play their Association Football matches at a place called the Baseball Ground.]

According to Jason Burke's book on al-Qaida, the allegations surrounding Osama's love of Arsenal are apparently completely untrue.

I'm not above recycling the odd urban myth on this blog from time to time....

To the best of my knowledge CK is a Chelsea fan, although he also has a local allegiance to Ross County.