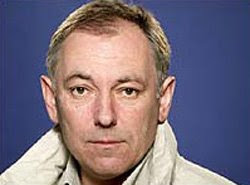 Forty years ago this year, a young Derbyshire police officer by the name of Aled Lloyd was killed in a panda car accident while answering a false emergency call. It was the kind of tragedy that would have broken many families, but with the support of their mother Agnes, Aled's two young sons Kevin and Terry went on to make their respective marks in the world of television, one as an actor, the other as an award-winning journalist.

Against that backdrop, the death of Kevin Lloyd from alcoholism brought on by the pressures of TV stardom in 1998 was bad enough. But the killing of Terry Lloyd by US forces shortly after the start of the Iraq War in 2003 was, for me, the saddest episode in the whole wretched debacle.

So I wholeheartedlty support the campaign launched by Terry's former boss at ITN, David Mannion, to make it a war crime to intentionally kill a journalist.

It is too late for Terry, and for Agnes who died shortly before him. But not too late to hope that some good may yet come of the senseless death of this brave reporter - truly a "local hero" up here in God's Own County.