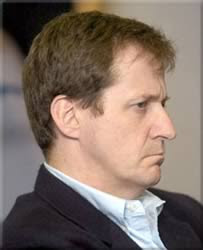 So Alastair Campbell is to publish his first volume of diaries, shortly after Tony Blair leaves office this summer. The Guardian's Julian Glover has today published his own top tips of what the great spinmeister should write about, but here's a list of some of the questions I'd like answered, some of them of purely personal interest, others of broader significance to the body politic.

1. When you held your first briefing as Downing Street press secretary on May 2, 1997 you told us that Tony Blair "felt he had been given a remarkable opportunity to unite the country." Do you genuinely think he has done?

2. When in 1995 you briefed the Lobby that Derek Foster would be given a Cabinet job in return for standing down as Chief Whip, were you aware that he would in fact be offered only a junior ministerial post?

3. Why did one of your deputies tell me in October 1997 that Dr David Clark had "totally lost it" and would be sacked in the next reshuffle, and was it linked to your attempts to undermine the Freedom of Information Bill which he was then drawing up?

4. From whom did Tony Blair first learn about the incident on Clapham Common involving the then Welsh Secretary Ron Davies in September 1998, and why did you refuse to answer this question when I asked it at a Lobby briefing?

5. Do you regret your decision to dispense with most of the heads of the departmental press offices following Labour's first election win, and has the resultant politicisation of Whitehall improved the conduct of government?

6. Why did you brief the Lobby in 1999 that Tony Blair believed the North-South divide to be a "myth," when he never actually said any such thing?

7. A copy of the September 2002 dossier on Iraqi WMD sent in advance to evening papers showed the so-called "45-minute claim" highlighted in flourescent marker-pen. Did you personally authorise that?

8. You said in your diary that it would "fuck Gilligan" if Dr David Kelly were revealed as the source of the BBC report which questioned the 45-minute claim. Do you deny that you had any part in making his name public?

9. When you announced last year that the death of Dr Kelly had almost caused you to have a nervous breakdown, did you think of the impact this might have on the Kelly family?

10. When you left an offensive personal comment on this blog last July, why did you not have the courage to post as yourself as opposed to anonymously?

I think that will do for now....I'm sure other readers will be able to fill in any questions I have missed.

Matthew Norman in the Independent this morning nails it:

'The most important thing with a political memoir is how far you can trust the author's version of contentious events. So "A Less Than Reliable Witness - Sir Maurice Drake" might fit the bill for this one. Sir Maurice was the High Court judge who was not impressed with Ali's evidence under oath during the malicious falsehood trial brought against him by Rupert Allason as early in the Blair years as 1996.'

What did he say anonymously, Paul?

I'd guess it is http://paullinford.blogspot.com/2006/07/disinformation-or-just-plain-wishful.html.

How about "We're you always a tosser or did it take lots of practice?"

I think you've skewered him properly here, Paul, particularly Point 6. Have you no mercy?

Given Alastair's well known penchant for plugging his endless charity work, why doesn't he tell you how much from his £1 million-plus memoirs deal he'll be giving to charity. On second thoughts, don't bother. I think we all know the answer. He is a greedy, self-obsessed, (ex)alcoholic.

Given Alastair's well known penchant for plugging his endless charity work, why doesn't he tell you how much from his £1 million-plus memoirs deal he'll be giving to charity. On second thoughts, don't bother. I think we all know the answer. He is a greedy, self-obsessed, (ex)alcoholic.

Another question for Alastair - between 1994 and and 1997 from which organisations did you receive payment?

It was me who posted the offensive comment last year - not Alastair. you stupid cunt.

Do you really think you even appear on his radar? A failed regional lobby journalist who never made the big time and has a chip on his shoulder since.

As I explained at the time, AC is perfectly well aware of who I am.

There was nothing "failed" about my time in the regional lobby. I did the job for nearly a decade and both the papers I worked for
were consistently happy with what I turned out. It is their opinion of my work that matters, not yours.

Well said, Linford. I believe the anonymong in question may speak from fairly recent personal experience when he uses words like 'stupid', 'cunt' and 'failed'.

Campbell's demeanour from the moment questions began to be raised about going to war in Iraq was demented. It seemed to me that anybody or anything which might hinder the progress of his master would be targetted and berated.

Like some common bully boy, Campbell marauded around denouncing one of the great British institutions, one of the Foreign Office's finest organs for disseminating British disinformation to the world at large. What a clever man indeed.

For this writer, the sole redeeming characteristic of this man is that he has an affinity for Burnley FC.

Who, I wonder, said 'who will rid me of this fool? (about Kelly) and who heard the words uttered? Did someone say it about the Foriegn Secretary too..I notice I am not alone in re-pondering this subject, once so efficiently buried by the frowns and sideburns of a tipsters' oh so hysterical narration.

I remain far from convinced that the so called advisors around the Prime Minister were sober and /or without tainting in the nostrils during this period in our history. There was that air of boorish excitement of the kind that Anthony Trollope used to describe so well.
The (very) minor gods were now centre stage, they too about to have their war and nobody, but nobody was going to intrude upon their moment of fame. It could not be some scientist who, un-beknown to these supposedly educated kids and ex porn writers had already given greater service to both the USA AND UK than they would in a whole lifetime. no matter...this is now, mate and we're what matters...they probably thought they could become bigger than Free or Ted Nugent in the mid west after showing such loyalty.

The lack of contrition about the death of Dr David Kelly (let's ignore a few minor details about how dead men can raise themselves after death or how such an 'unstable' man had been deemed worthy of visits to top secret chemical weapons facilities where no other British scientists visited)...and as for instability or the potential to be, the poor doctor was certainly being judged by some real padigms of virtue.

No Fitzoy Mcleans or G K Youngs in this shower. Poor Dame Eliza, reading her breakfast notes each day, must have wondered how the route for such people from the Ivy through the gutter and into such inordinate power had been allowed to come about...so much potential for damage to our future security, tut tut.. she must have well nigh choked as she read of the extrraordinary laxity in personal standards. A woman of such eminent commons sense would have ssen all too clearly how inevitable it was for lax intellect, decisions made on the hoof and an he who shouts loudest approach to develop in the midst of such common-ness as befits a regime compromised of the nouveau riche and their lower middle class runners.

MI6 and CIA, however neutered by beaurocracy and politisation they had become, neverthelss, still had personel who must have known that the non entities they were were entrusting detailed intelligence to wouldn't have known how to assemble anything in 45mins.

When I see men like Drumheller and Behr writing books, it tells me a lot. I dread to think what we are going to learn in the years to come about what has been going in Britain (Butler, Hutton, cancelled inquests aside) but right now the evidence on al jazeera (bomb it), cnn (shoot at hotel room), bbc (kidnap it,don't kill it, Dahlan boy) is far from encouraging.
We know something very wrong is taking place, just as we knew after the e's wore off in 1997 that 'things getting better' was an Ibiza mirage about to become a nightmare, but maybe not a national humiliation.

But I do hope Sir John managed to find a replacement replace Dr Kelly. Some of us like the idea that our country is being properly defended rather than being used for personal gain and enrichment.