A day for remembrance 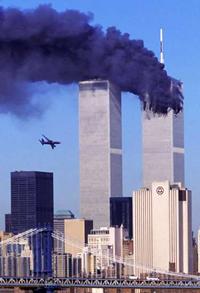 I guess everyone remembers where they were when 9/11 happened. I was working in the House of Commons at the time, just the length of a corridor away from Big Ben, while my wife and I were living in Docklands, a stone's throw away from another potential terrorist target, Canary Wharf.

A colleague hurried back from lunch to say a plane had just crashed into the World Trade Centre. We switched over to Sky News in our room in the Press Gallery and watched as the plumes of smoke rose from the first tower, convinced we were watching the aftermath of a terrible accident.

Then the second plane appeared. "Look, there's another one!" exclaimed a regional newspaper colleague. Almost as he said it, the other plane smashed into the second tower.

I don't think any of us could quite believe what was happening. For a moment, there was silence in the room, then someone said slowly "That was deliberate," and we all hit the phones to our head offices.

Of course it went without saying that the world had changed in an instant, but what I don't think we all fully appreciated at the time was how much British politics had changed too, kicking off the chain of events that was to destroy Tony Blair's once-promising premiership.

Mr Blair had been due to give a speech to the TUC that day in which he would mount a vigourous defence of the Government's public service reforms. Of course the speech was never delivered, and somehow the raison d'etre of a government that had come into power to improve the public services got lost along the way too.

But personal reminiscences and political consequences aside, it is right that, above all today, we remember those who lost their lives.

Here is one of many sites that aims to commemorate the victims of 9/11, including those that died in the other hijacks.

Email ThisBlogThis!Share to TwitterShare to FacebookShare to Pinterest
Labels: Terrorism

With respect, if the WOT destroyed TBs premiership, how did he win an 80-seat majority 16 months ago ?

The WOT may have played havoc with Labour activist loyalty, but it didn't lose him any elections except perhaps Walter Wolfgang on the NEC.

The real failure of the Blair administration was his abandonment of the attempt to reform welfare, in glaring contrast to Clinton's success. Rather than trying to make the British underclass employable, he preferred to import new taxpayers to support them - a policy which will have consequences in future years.