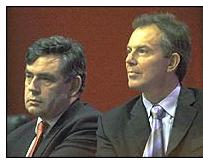 Tony Blair has confirmed what we already knew and said he will stand down within the next year. Gordon Brown has said the timing is his decision and warned there can be no more private agreements or pacts.

But is it enough? Will Tony Blair now get his 10 years after all? And will Gordon Brown really just sit back and wait for him to go, in the certain knowledge that each day that goes by gives his enemies more chance of finding an alternative?

No, I don't think so. The heart of the issue - the political dynamic which is really driving this crisis and which has caused it come to a head now - remains unresolved.

That is quite simply the desire among Labour MPs for a new leader to be in place by the time of the local and devolved elections in May so they can begin the fightback against David Cameron's resurgent Tories.

On my blog earlier, I set out an way in which that could happen, with a new party leader taking over in March, but Blair remaining PM until May - the "Aznar Option" as it has been termed.

This to me is the only way in which both sides can salvage something from this, but there is no indication that it is even on the agenda. Indeed Mr Brown, in his statement, seemed to go out of his way to stress there can be no more deals.

The only Blairite minister who has really been seeking to pour oil on the party's troubled waters has been David Miliband, who I must say has gone hugely up in my estimation today.

In his interview with the New Statesman, he not only ruled himself out of contention for the leadership - a sensible move at his age - but made clear that he wanted a stable transition to Mr Brown - and no-one else.

By contrast, some of the Blairites seem determined to try to goad Mr Brown beyond endurance, with John Hutton the new flavour-of-the-month among the ranks of the "Anyone But Gordon" faction.

One Cabinet ally of Mr Blair is reported to have told the BBC's Nick Robinson tonight: "He would be a fucking dreadful Prime Minister and I will do everything in my power to stop him."

Mike Smithson has a theory that this is what the row has really been about - that Brown has realised Blair intends to make a real contest of it by stringing out his departure and endorsing other candidates' right to put themselves forward.

If that proves to be the case, then this week's shenangigans will prove only to have been the opening skirmishes in a bitter and protracted civil war.

Paul, where is Peter Hain in all this. I keep hearing 'hint, hint' noises about the ex-student radical

He - Hain - plans to stand for deputy leader and has been lobbying the leaders of the big four unions for supoprt for well over a year. This has not been without success, as the unions seem to prefer him to the more obvious union candidate, Alan Johnson, who they regard as something of a turncoat. AJ's standing amongst trade unions is such that, a few years back, his own union, the CWU, passed a motion which forbade the appearance of any photos of their own ex general secretary in the CWU's internal newspaper.

Morrisox - I'm tempted to say you would know better than me what Hain is up to ;-), but since you've raised the question, I think he is quite possibly going to be the Geoffrey Howe figure. It will be either him or Straw.

No I disagree - it's definitely Milliband. At the moment, he's playing the John Major role at the fag end of the Thatcher administration.

Remember, it was Major who 'wasn't interested' in being leader. It was Major who put his name down as Thatcher's proposer on the ballot sheet. It was Major who, when asked by Ken Baker (Thatcher's campaign manager) after the first disasterous ballot to positively endorse her and specifically rule himself out of any leadership bid, refused to do so. The reason? He couldn't apparently speak because he apparently had a bit of a toothache...... He didn't even have the bottle to talk one to one on the phone with Baker - he left it to long suffering Norma to do the dirty - (noble or what?)

Once he had spiked her lifeboat and detatched himself from the drowning Thatcher, the way was open for him to be 'reluctantly' 'dragged' protesting, kicking and screaming up to the ballot box by an apparent groundswell of (henchmen) back bench MPs..... There to be presented as 'the healing candidate' - and the compromise that everyone could fall in behind.....

Major, 'reluctantly' accepted the propositiion that he should stand. Major did Thatcher in, good style. His explanation as to why he stood - when he said he wouldn't was that the party demanded he did - nothing to do with him Guv'.....

David 'iago' Milliband is an arrogant snake. A cold fish obsessed with power. He's a low life schemer, playing the same role that Major played. Then, the Tory party didn't vote for the best person for the job, they voted for the Band-Aid candidate - and we all know what a disaster that turned out to be.

You can guarantee the same thing will happen with Labour. The longer it's left, the harder it'll be for Brown (the Heseltine character) to get the top job - the compromise will be the NuLabour version of the healing candidate - hence Milliband's attempt at Churchillian gravitas........ he knows where he wants the end game to finish - David Milliband, PM.. NuLabour - Old habits.

BTW - Slugger O'Toole gave you a glowing recommendation about your coverage on the Brown -Balir feud while he was being interviewed by Peter Allen on the DriveTime Show on Radio FiveLive last night.....

Also disagree with you about Miliband, Paul, although I don't think I'd go quite as far as the above. All that stuff about the "refreshing, energising transition" to Brown struck me as a fairly shameless bid to be the next Chancellor.

Well, he'd make a better one than that loud-mouth Balls, whose style of political discourse basically consists of shouting at you until you are steamrollered into submission.

Depends on the audience with Balls. I have seen him meek and mild, though spirited, talking to a bunch of accountants.

As ever with NuLab, he sidled up to me afterwards: "How did it go down, how do you think I did, what were they saying??"

Despite best efforts I know no more than you, Paul, about Hain the Pain's activities. But a couple of 'canaries' suggested he was primed for action.

Can I make the suggestion, as I did on my blog, that talk of a transition or coronation boils down, in the end, to contempt for the public at large?

In my opinion Blair, possibly more than any other politician, has tried to use personality to win over the electorate - being seen as 'purer than purer' and a 'regular kinda guy.'

Therefore, it is fair to assume many will have voted for their Labour MP because of Blair. Surely such a fundamental change within the party a person voted for - that of leader - should bring into question the mandate to govern given at the election.

Idealistic maybe, but it's an opinion!