The Johnson-for-PM plot: Where are the mainstream media? 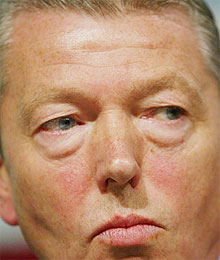 I won't bore you with the technical details. Suffice to say that if you are really interested in how registering domain names works, and how an Alan Johnson 4 Leader website came into being, you can read it all in detail on Dizzy Thinks and Bloggerheads.

But the point is not how they did it, but the fact that it was done at all. And it seems to me that, between them, Dizzy and Tim Ireland have established beyond reasonable doubt that - in Tim's words - before there was an alleged plot by Brownites to depose Blair, there was an actual plot by Blairites to undermine the Chancellor and push Alan Johnson as the next PM!

The key figure in the plot is a character called David Taylor who will already be well known to readers of Tim's blog. He is the absurd loyalist behind the Keeping the Faith website set up to proclaim the Prime Minister's "achievements" in the aftermath of last week's "Brownite coup."

This story has now been on Dizzy's blog since Monday. It has even been on Iain Dale, the blog which not inaccurately boasts that it is read by virtually every political journalist in Westminster. So why hasn't it been in the papers?

Eleven years ago, when I first started out in the Lobby, some friends of Michael Portillo were caught installing some phone lines in a house near Westminster which was to have been used in a leadership campaign. There was an almighty furore and Portillo's leadership chances were sunk, as it turned out, for ever.

The technology may have moved on - but is what Taylor is now doing on behalf of Alan Johnson really any different to this?

Could it possibly be that the papers have ignored the story because they hate the thought of the leadership contest turning into a foregone conclusion, and are themselves desperate to promote Johnson as a credible alternative?

I find it hard to believe Westminster hacks would agree and adhere to a conspiracy of silence on a story so tentative. Then again, you're the expert: do they really collude like that?

Paul thanks for pointing out what is certainly an oddity. As it stands, the only "aminstream" media even to metnion it was the diary Whip column in the Sun.

There were of course questions raised by some at the time suggesting that Taylor was acting alone, but later investigation does suggest a connected path between Taylor and Johnson through Hull.

Why do I immediately think of John Major when I see Alan Johnson....

Please, please lets not have a NuLab rehash of the Major governnment fiasco of the early 90's. Even a government run by the odious little slug Gordon Brown would be better than that.

but look, he's a chancer nobody. If Johnson or anybody at number ten wanted to start a proper johnson campaign, they wouldn't have used some random assistant to a Welsh assembly member (or whatever) to do it. There is no reliable indication that he was working on the authority of anybody at all. There's no actual story here, other than an over-keen NewLab geek trying to curry favour. Which is why nobody has written about it, I'd imagine.

ljjwiugliling of AJ in the Sunday papers was odd - it was virtually word for word across the Telegraph, Observer, ST and Indie. Also of interest is the slower but steady promotion of John Hutton as some kind of Blairite stalking horse. Of interest here is the Hutton / Milburn axis. They were best buddies in Trade Union CND - and now John Hutton is MP for Barrow and the submarine building shipyard there, and, in consequence a firm believer in Great Britain's 'deterrant' - so much so that some old CND hands renamed him 'Press the Burton Hutton'