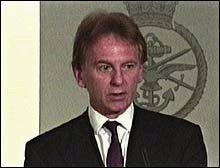 The public intervention of arch-Brownite former Europe Minister Doug Henderson (pictured) into the Labour leadership wrangle this afternoon will doubtless be construed by the Blairites as evidence that the long-awaited Brownite putsch is under way. Indeed, long-time Blair admirer Martin Kettle has already rushed into print on Comment is Free to denounce the "plot."

I'm not so sure myself. I think what we are now seeing is not so much a conspiracy but the outworkings of the natural laws of political dynamics.

Dougie H is not an objective witness. He hates Blair's guts for having sacked him from the Government in 1999, purely on the grounds of his association with Brown rather than his performance as a minister, and he justifiably expects to return to office, though perhaps not at Cabinet level, in a Gordon adminstration.

But to me his comment about why Blair should go now, and what is to be gained from him hanging around for another year, hits the nail on the head.

Newcastle North MP Mr Henderson said today: "There should be a new leader in place by the end of March in time for the local elections and mid-term polls in Scotland and Wales."

In my previous post I discussed the various ways in which Blair might yet be forced out, most probably by a rebellion in the Cabinet or the PLP. These elections seem to me to be the key to the whole affair.

If Scottish and Welsh MPs decide collectively, as many of them already seem to have done, that Labour faces disaster in next May's devolved elections as long as Blair remains in post, then I think it is going to be incredibly hard for him to resist the pressure to depart soooner.

In other words, he's not going to get his 10 years after all.

Anyway, enough of the serious stuff. Here's a couple of light-hearted takes on the Blair departure story which I really appreciated today.

Tim Dowling in the Guardian imagines a possible Blue Peter interview with Mr Blair as he embarks on his "legacy tour," while Blairwatch suggests some possible tour venues, culminating in a grand finale in the Millenium Dome whilst the Women's Institute sing Jerusalem.

Somebody has just told me 'Peter Hain is the kingmaker'. Now why would they say that?

I don't think it's a 'coup'; more a spontaneous expression of pent up dissatisfaction but: it did seem like Henderson was operating to some kind of plan; and, the biggest clue of them all- Gordon has said not a thing. If he's not behind it he's certainly letting it run its course. Maybe he thinks he discerns the wave which will sweep his hated rival away for good....?

I think you're spot on about the dynamics. Brown simply cannot afford a meltdown in the Holyrood elections, especially when the Lib Dems are flirting with offering the SNP their referendum on independence.
I'm sure if this goes on much longer, the Brownites will spell out the 'future of the UK' argument more explicitly. (The future of the UK being intimately bound up with Brown's prospects, of course.)