In defence of Benedict 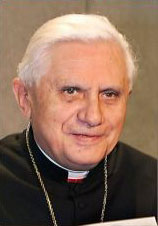 I hold no brief for the Roman Catholic Church. My general view of it is much the same as the bloke who wrote the script for Godfather III. But I do think Pope Benedict is being very unfairly, if somewhat predictably pilloried for his comments about Islam.

Don't get me wrong. If Benedict was primarily a political figure, a Head of Government or Head of any other State but the Vatican, then I would agree that he was under a duty to be inclusive and non-confrontational in his statements about people who held different religious beliefs. Or no beliefs at all for that matter.

But the role of the Pope is not - or should not be - to be a political leader or Head of State. It is to be the spiritual leader of hundreds of millions of Christians across the world.

And if the leader of the world's biggest Christian denomination cannot speak out against another religious faith which, by its very existence, denies the esssential truths of the Christian gospel, then who on earth can?

I have thought for some time now that we have been headed down a very dangerous road in our society, whereby lampooning Christians and Christianity is virtually de rigeur among the liberal elite but criticising any other faith - and in particular Islam - is almost on a par with racism.

Laws purportedly designed to promote "religious tolerance" are instead promoting a form of religious intolerance, whereby no-one is allowed to say anything about another religion, even if its beliefs are antithetical to one's own.

This will naturally militate against belief systems such as Christianity which make exclusive claims to validity, in favour of a syncretistic, New Age mush that holds that all religions are equally valid - and therefore equally meaningless.

I would not be in the least surprised if, in my lifetime, it became a criminal offence in this country to preach the authentic Christian gospel - that faith in Jesus Christ is the only way to God.

At the conclusion of her piece in today's Guardian, Madeleine Bunting bewails the fact that the Catholic Church is in danger of "failing the great challenge of how we forge new ways of accommodating difference in a crowded, mobile world," speculating that Pope Benedict has "another direction altogether in mind."

Too right he has, Madeleine. He is trying to take a stand against the relativism that is poisoning Western Culture and threatening to snuff out our religious freedoms. And about time too.

Email ThisBlogThis!Share to TwitterShare to FacebookShare to Pinterest
Labels: Christianity

Points impeccably well-made, Linford. I'd begun to think I was living on another planet.

Mind you, if this was Comment is Free I'd be donning my hard hat in preparation for a rhetorical thrashing from all those peace-loving, non-agressive, super-tolerant liberals.

Because the one thing you seem to have ignored in your outrageous assault on Islam is that it is infact okay to throw Christians to the lions...

I couldn't believe the Catholic Londoner's post on this - http://catholiclondoner.blogspot.com/2006/09/very-rushed-post.html. It's utter hypocrisy, but unlike the Pope, these people won't be forced to account for their actions.

But Paul, isn't there a whiff of hypocrisy about the leader of the Roman Catholic Church accusing any other religion of oppression?

Can’t say I’m an expert on the “authentic Christian gospel” but it sounds pretty grim. If: “…faith in Jesus Christ is the only way to God” then what about the rest of us? I suppose we burn in hell for all eternity (No time off for good behaviour?). Anyone who believes this (Christian or Muslim) subscribes to a bigoted and cruel doctrine. “Syncretistic, New Age mush” seems preferable to me. As for all religions being equal – they are; they’re all nonsense.

Leading 1 billion people is unavoidably a political role and it is only the spread of secular rationality and, to a lesser extent, "New Age mush" that have deprived the Vatican of the power it held for centuries. They did not relinquish it willingly.

Of course, as an atheist I would love for a time to come when religious groups have no political power whatsoever. Until then I hope they use what power they have responsibly.

I do agree, however, that many commentators are guilty of a gross double standard when applying freedom of speech to different religions, and of this Madeleine Bunting is clearly culpable.

A final point: one need not be religious to have a clear sense of moral duty. In my experience many of those least well equiped to halt the slide into postmodern befuddlement are Christians, who seem more concerned with homosexuality than the real moral challenges of our age

Ps. Keep up the good work. I find your blog invariably fascinating and well informed

Quite agree Benedict has every right to express himself as he did. However, the way he seems to have been taken aback by the backlash suggests some political naivety. Much as I loathed many of the man's opinions, I don't think his predecessor would have been caught out in the same way.

Wouldn't this have constituted the criminal offence of "inciting religious hatred", if Mr Blair's proposals had passed into law !!!