The Wages of Spin 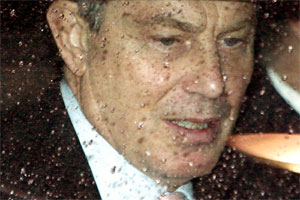 Two, or possibly even three letters have been sent to Tony Blair by Labour MPs demanding that he stand down immediately. The leaked memo published in today's Daily Mirror shows why they are right.

When I first saw this, I have to say my first reaction was that it was a spoof. Someone on another blog has likened it to an Armando Iannucci sketch and I think that's about right.

But Kevin Maguire, loyal Brownite though he may be, is not the kind of reporter who gets spoofed. Whether or not Blair himself ever saw the memo, I do believe it is genuine.

What it shows, above all, is that whatever tenuous grip on reality might once have existed within the Blair Bunker has now been completely and irretrievably lost.

The memo states that Mr Blair "needs to go with the crowds wanting more. He should be the star who won't even play that last encore. In moving towards the end he must focus on the future."

It's that phrase "needs to go with the crowds wanting more" that does it for me. Has whoever wrote that picked up a newspaper lately, or read the opinion polls, or spoken to ordinary voters, or Labour Party members for that matter?

If they had, they would know that the country, and the party too, is fed-up to the back teeth of Blair, has been for some time, and just wants him to get on his bike.

The last conceivable date at which Blair could have "gone with the crowds wanting more" would have been immediately after the overthrow of Saddam Hussein in the Spring of 2003, before it became clear what an evil morass we had involved ourselves in, or how far the public had been deceived into backing the war in the first place.

This evident loss of touch with reality is all of a one with that strange "Anthony" mug with which Mr Blair appeared at his recent monthly press conference.

"You're a man who's in charge, others follow your lead. Your refined inner voice drives your thoughts and deeds. You possess great depth and have a passionate mind. Others think you're influential, ethical and kind," it read.

A few years back, the Downing Street spokesman Tom Kelly sought to rubbish his namesake Dr David Kelly by describing him as a "Walter Mitty Charachter," ignoring, for instance, the pivotal role which Dr Kelly played in verifying the disarmament process in Russia after the fall of the Berlin Wall.

What is outlined in the memo is not so much a resignation, as an ascension into heaven, or at least into the bright, sunlit uplands of elder statesmanship.

As Maguire states: "Privately a highly detailed battle plan is in place that aims to catapult Mr Blair out of office and into elder statesmanship with as many bells and whistles as possible. The key aides masterminding the most drawn-out exit in British political history have thought of everything - even a celestial choir, courtesy of Songs of Praise.

"While Mr Blair scolds us for "obsessing" over his exit date, it is clear he is a lot more obsessed."

But to those of us who have spent the better parts of our careers following the fortunes of Tony Blair and New Labour, none of this should come as a great surprise.

Mr Blair was spun into office in the first place, and to be spun out of office courtesy of a carefully co-ordinated series of photo-ops and interviews would doubtless be an appropriate end for the Great Charlatan.

Environment Secretary David Miliband has said today that he reckons it will happen in 12 months time, but whether or not that constitutes confirmation of the wretched "timetable" which Mr Blair was only days ago seeking to deny us, he won't last that long.

All political careers end in failure - but Blair's is now in danger of ending in farce.

Doesn't sit all that comfortably with Riddell's piece about the latest polling in today's Times, though.

'The people' may not want Blair, but as they're no keener on anyone else, it would be a bit of a leap to say that everyone is clamouring for him to sod off.

It is fitting that Blair's obsession with history and his place in it is such a factor in his increasingly farcial fall.

Lord White must have had the nod from Gordon.

Only if the crowd is the one from 'A Tale of Two Cities', with Blair muttering 'It is a far, far, better thing' etc.

You were right the first time, Paul. We have now entered the realms of sheer comedy.

Crowds wanting more may be stretching it. But people who have never read a blog in their life think a lot more of Tony Blair than those inside the bubble.

When/if he does go, lets hope the transfer of power is a total blood-bath. The entertainment would be the least they can do to make up for the shambles they call government.

I wonder if this memo was written (or co-authored) by Ruth Turner? You may remember that she's the great political luminary who said, regarding Labour's local election thrashing in May, that people were 'angry with Tony' because they didn't want him to go (!)