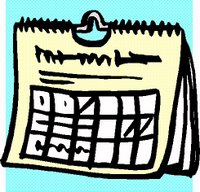 So it is apparently official. Tony Blair's closest allies confirm he will be gone in less than a year. George Pascoe Watson in the Sun goes further and names May 31, 2007 as the actual resignation date, possibly by the clever journalistic device of working eight weeks back from the end of the 2007 Parliamentary session. For Junior Defence Minister and fellow blogger Tom Watson it is not soon enough, and he quits.

Having long taken the view that Blair would try to hang around for his 10th anniversary, I concluded yesterday that it was no longer possible. Here's ten factors and forces which could intervene in his plans, ranging from a change of heart by the man himself to Harold Macmillan's fabled "events, dear boy, events...."

1. Himself. Blair might just decide he's had enough of all this, and announce a surprise departure. For as long as the process remained in Blair's hands, I thought this was quite a likely option, but the announcement of a "timetable" has made it less likely, as it would now look like he was succumbing to pressure. Chances: 2/10.

2. Gordon Brown. The Chancellor might finally cotton-on to the fact that Blair is determined to stitch him up, and launch a pre-emptive strike. It would be an incredible gamble and might bring the curse of the regicide down on his head, but that might be better than hanging around for Reid/Johnson/Miliband to emerge as serious alternatives. Chances: 4/10.

3. John Prescott. The Deputy Leader might once have been a plausible conveyor of the silver bullet, but his credibility is shot. He could however still bring down Blair in another way - by falling on his own sword. Since Blair has already said he is going, there would then be pressure for the leadership and deputy leadership to be resolved at the same time. Chances: 6/10.

4. The Cabinet. Despite the decline of "Cabinet Government," it was the Cabinet that did for Thatcher in the end and I now think this is the likeliest denouement for Blair. They know it will almost certainly put Brown in No 10, and that will mean the end of a good few Cabinet careers. But better that than another year of drift and division. Chances: 7/10.

5. The PLP. Blair's support within the PLP is visibly waning and unless the political situation improves for Labour - hard to see while Blair remains in place - it is entirely plausible that he could fall victim to the kind of internal MPs revolt that did for both Iain Duncan Smith and Charles Kennedy. If so, expect the Scots and the Welsh to be to the fore. Chances: 6/10.

6. The House of Commons. Alternatively, Blair's dwindling support in the PLP may lead to his defeat on a major piece of Government legislation and a vote of no confidence. This would however require David Cameron's acquiescance, and it is in Cameron's interests to keep Blair in power as long as possible. Chances: 3/10.

7. Conference. There is still a theoretical possbility that someone could bring forward a motion to the party conference, or demand the connvening of a special conference, that could in turn trigger a leadership election. It's a remote possibility, but I include it here as it is the only formal procesure that actually exists. Chances 1/10.

8. The public. Elections for the Scottish Parliament, Welsh Asesembly and English local authorities take place next May. Blair will be gone soon after that anyway so the results won't have a direct impact on the date. But what about by-elections? There are bound to be some, and they could easily turn into referendums on whether Blair should stay or go. Chances: 5/10.

9. The police. The most intriguing possibility, and the one which could yet bring the Blair years to the most ignominious end imaginable. Inspector John Yates is currently investigating the award of peerages in return for donations to Labour funds or towards setting up City Academies. If Blair has his collar felt, he is toast. Chances: 4/10.

10. "Events." These are by their very nature always beyond a politician's control, but invariably have greater impact when that politician is already weakened. In the early days, Blair's popularity enabled him to brush such setbacks aside. Not now. Some new scandal affecting a Labour minister, or some new catastrophe in Iraq could easily tip him over the edge. Chances: 7/10.

Chances of none of these things happening, and Blair surviving until next summer: 0/10.

I think No7 is a distinct possibility, Blair hasn't been able to silence his MPs, despite repeated calls to bring them to heel, they have ignored him.

No 7 is the subject of a contemporary resolution to Conference, already adopted by some CLPs.

Cherie tells him it's time to come home for dinner.

I think the PLP is currently shifting rapidly but Cabinet tomorrow could be the equivalent of that November day when Maggie was told, albeit one at a time, that her time was up.
The event which would save him might be a terrorist atrocity, which would please conspiracy theorists everywhere...

Marvelous post - very interesting. Needs work on the maths though!

As you hint, everyone at Westminster knows that the ludicrously pompous George Pascoe Watson just took a punt on the May 31 date after getting kicked around the office by his editor over the Mirror's leaked memo scoop the day before!

11. Fortuititous recurrence of heart trouble. Face-saving retirement 'under the doctor'.