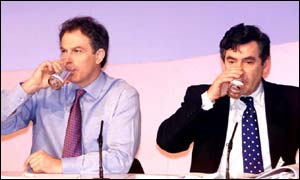 Tony Blair is due to set out later today the plans for his departure, but unless he agrees to go before the Scottish and Welsh elections in May, I can't see it resolving the current crisis.

As I wrote yesterday, it is these elections that now lie at the heart of the issue, and the very real fear among MPs that Labour will lose control of the Scottish Parliament and Welsh Assembly unless Blair is gone by then.

Blair and Brown are reported to have had a furious bust-up, with the Chancellor demanding that the PM go before Christmas, and Blair continuing to dig his heels in.

As both the Times and Guardian have argued in their leader columns this morning, some sort of deal is now urgently necessary to stop the Government imploding. Here's what I think such a deal would need to say in order for it to stick.

* Brown publicly disassociates himself from the current attempts to force Blair out of office now and endorses the need for him to be allowed to make a "dignified exit."

* Blair announces that he will leave 10 Downing Street on May 4, 2007, immediately after the local and devolved elections, and three days after the 10th anniversary of his coming to power.

* Labour convenes a special conference in January to trigger an election for a new leader of the party, to be in place by March.

* A two-month dual premiership then ensues, with the new Labour leader heading up the party's campaign for the local and devolved elections while Blair remains a "caretaker" Prime Minister.

* Blair makes clear that he continues to endorse Brown as his successor and disowns the comments by Alan Milburn and Stephen Byers which appear to suggest the need for a different direction.

* Brown continues to make clear that his Government will be New Labour to the core -which to be fair he always has done.

If this scenario appears slightly to favour Brown, it is because it is the Chancellor who is in the stronger political position at the moment.

But there needs to be compromise on both sides now. If there isn't, Blair is going to end up being dragged kicking and screaming from power, and the only winners will be the Tories.

Update: Obviously the essence of my proposed deal is that Blair gives up being party leader in March before he gives up being Prime Minister in May. Guido has a post in which he refers to this solution as "the Aznar," after a similar arrangement in Spain before Jose Maria Aznar stepped down.

Blair's doubt about Brown is partly policy differences, partly a suspicion that he is psychologically flawed.

The alternative scenario, which has not been far from Blairite minds in these past few days, is that the brooding Broon blows it.

"The only winners wdill be the Tories" - the logical extension of Blair's entire tenure. That is what he was FOR!