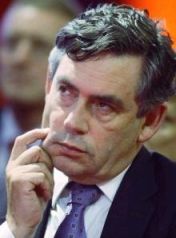 Says Dale: "If it bombs, the media will again develop a herd instinct, just as they did last year following David Davis's speech." And he should know of course.

To me this touches on an important issue - just where is Brown's support in the media going to come from in the forthcoming leadership election?

Over recent weeks, even newspapers one might have expected to be loyal to the Chancellor in any leadership campaign have started to question his credentials - as Mike Smithson pointed out on PoliticalBetting.com on Saturday.

Brown's most steadfast ally in the media is likely to be the Daily Mirror. Its Associate Editor Kevin Maguire calls the shots on political matters and he is a long-standing admirer of Brown. Besides that, the Mirror is likely to view a Brown premiership as slightly more in tune with the traditional Labour values held by much of its readership than a continuation of Blairism under an alternative leader.

The Daily Mail has also long been regarded as Brownite territory, largely on account of the friendship between Brown and its editor Paul Dacre, although presumably he also feels that the Chancellor's solidity and experience are the kind of virtues that appeal to Mail readers.

But leaving those two, admittedly influential newspapers aside, Brown appears to be facing an uphill struggle to build a broader coalition of media support as the contest draws nearer.

The Guardian has noticeably changed its editorial tune from "smooth and orderly handover" to "there must be a contest" over recent weeks and it might be that the voices of Brown's admirers on the staff - Toynbee, Ashley et al - are being cancelled out by those of Blairites such as Martin Kettle.

As for the rest, the $64m question is of course which way Murdoch will turn. He is said to like and admire Brown, but in a contest between Brown and, say, John Reid, it is hard to see Murdoch backing the candidate perceived as the more left-wing.

On the other hand the coventional wisdom about Murdoch is that he always backs the winner, in which case, it is hard at the moment to see any departure from Brown.

But if, as is widely believed, Murdoch is planning to endorse David Cameron at the next election, he might just do what he has never done before - deliberately back a Blairite loser, to give himself the perfect excuse to switch his support to the Tories.

I can almost see The Sun's front page now. "Tony Blair was a great British Prime Minister. We were proud to support him through three magnificent general election victories in 1997, 2001 and 2005. But now, by electing the old-fashioned socialist Gordon Brown as leader, Labour has turned its back on Blairism - and so we're turning our back on Labour. Vote Cameron for 2009!"