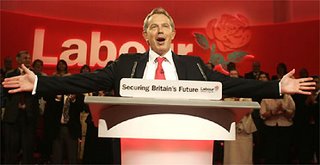 As any regular reader of this blog, or for that matter any of my newspaper columns will know, I have not always been very complimentary about Tony Blair. There is something about his showmanship and shallow ideological roots that repels me and in that respect, I suppose I have always been a natural Brownite, yearning for a return to the more substantial, less image-based style of politics that prevailed during my formative years.

But it is that very showmanship and ability to make others hear what they want to hear that makes him a master of the setpiece party conference address, and I confess that there have been times when even a sceptic like me has been held spellbound by them.

I heard my first live Blair conference address in 1995, shortly after joining the Lobby. This was the year of his "Britain as a young country" speech, with Blair successfully projecting himself as the young moderniser who could give Britain a fresh start after the sleaze and division of the Major years.

Without a doubt, though, the best and in retrospect most poignant was his 2001 "New world order" speech made in the aftermath of 9/11, in which he set out his vision not just of a better Britain, but a better world.

It was much caricatured. Matthew Parris memorably wrote at the time that he "left the runway on a limited strike to remove one individual from a hillside in Afghanistan, then veered off on a neo-imperial mission to save the entire planet."

True, but there undoubtedly was a feeling in the days immediately after 9/11 that, as Blair put it in that speech, "out of the shadow of this evil should emerge lasting good."

"This is a moment to seize," he said. "The kaleidoscope has been shaken, the pieces are in flux, soon they will settle again. Before they do let us reorder this world around us and use modern science to provide prosperity for all. Science can't make that choice for us, only the moral power of a world acting as a community can."

He was right, but sadly, he couldn't be as good as his words, and that phrase "The moral power of a world acting as a community" sounds unbearably hollow in the light of the unilateral invasion of Iraq which shattered not just that world community but the whole concept of international co-operation.

Today Mr Blair makes his 13th and final speech. But whatever memorable phrases he comes up with, it won't change the fact that his premiership has been a missed opportunity, both at home and abroad.