Labour contest: How is the Cabinet shaping up? 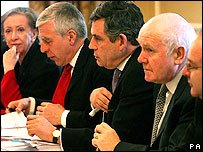 I began this week's postings on the Labour Conference by posing the question who is backing Gordon Brown for PM among the Press. I end it by looking at how much support he - or any other candidate - can expect from within the Cabinet.

For this purpose I have divided Labour's 23-strong top team into four groups ranging from Gordon's most public and enthusiastic supporters to the small faction who seem determined to stop him at any price.

It will immediately be seen that the Chancellor is in a very strong position, and that's reckoning without the cash for honours affair bundling Mr Blair out of office early after all.....

I will be updating this list regularly as the contest draws nearer and if and when the public positions of any Cabinet members change. I have a slight hunch that Alan Johnson might well be the next one to endorse him.

Cabinet members who are currently remaining neutral, including those required to do so by virtue of their position

I thought I saw John Reid saying that he could only see himself in number 10 making the tea for Gordon.