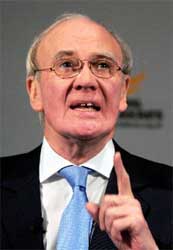 In the last hour - as they say on the BBC - Sir Menzies Campbell has sat down after delivering his first annual conference speech as leader of the Liberal Democrats. And first off, I have to say that the speech contained many good things, notably some judicious and well-founded attacks on the two main parties.

Yes, Tony Blair has squandered an historic opportunity to build a progressive consensus. Yes, the gap between rich and poor is now wider than it was under Mrs Thatcher. And yes, a Government which came into power to "save" the NHS is now closing hospitals.

As for David Cameron - well as Ming oh-so-rightly said, where was he when Mr Blair was allowing Britain to be sucked into its biggest foreign policy disaster since Suez? In the Government lobby backing military action against Iraq, that's where.

All good stuff. But political parties - especially those that aspire to be "serious," cannot live by attacks on the opposition alone. And as their conference week in Brighton draws to a close, I am still struggling to work out what the Lib Dems now stand for - other than not being Labour or the Tories of course.

During the last two elections, the party at least had a unique selling point. Okay, so the 50p top rate of tax was more of a symbol than a genuine instrument of redistribution, but it was a potent symbol nonetheless that put clear yellow water between the Lib Dems and the other parties.

Now the party has ditched it in favour of a fiendishly complex set of tax proposals, the main effect of which will be to take hundreds of thousands of middle-income income earners out of the 40pc bracket and into the 22pc bracket. While this might well prove a vote winner if the Tories or Labour don't nick it first, progressive taxation it isn't.

As for Sir Menzies himself, besides the palpable decency and obvious statesmanlike qualities, where was the spark, the star quality that is going to force the public to stand up and take notice as they did with Cameron a year ago?

I listened to today's speech open to being convinced that he is the right man to lead the party. But alas, I remain to be.

Is it not progressive to take 2 million of the low-paid out of income tax, Paul?

And isn't it fairly progressive when only the most wealthy 10% of the population (according to the IFS) will pay more under the Lib Dem tax plans?

Believe me, I'm looking forward to splashing this kind of stuff on my next Focus leaflet.

You asked what the Lib Dems stand for,in a word 'opportunism'.

Ah yes - but there must be equality of opportunism for all.

I accept there are parts of the new tax policy that are progressive or redistributive, but its biggest impact politically will come from the change in the 40pc threshold. I don't disapprove of this idea - I think Brown has used "fiscal drag" as one of his many stealth taxes - but I don't think it provides the Lib Dems with as clear and distinctive a message on redistribution as the original 50pc top rate did.

Nice to see the Lib Dem Blogger of the Year here anyway!

This is what my party should have done, instead of stressing them out through:
a) making them fill in horribly complicated tax credit forms
b) overpaying them, ignoring them when they say they've been overpaid, then demanding the overpayments back in one go
c) the micro means-testing which means a friend of mine, who works in a low paid factory job, fears doing overtime (which he'd like to do so his partner and kids can have a few extra things in life, such as more holidays and days out) because he'll end up worse off.

And, of course, if the dropping of the 50p rate makes it easier for them to hold seats such as Torbay, and possibly win back those such as Devon West, it'll make it harder for Cameron to win an overall majority next time (though, admittedly, the promise to take 2m of the low paid out of tax altogether will probably have great appeal to disillusioned Labour voters in Lab/LD marginals such as Newcastle North and City of Durham).

By the way, I loved Stephen Tall's reference to (and description of) Toynbeeism at his blog (though the state of mind he satirises could equally be called Philipsism or Hariism).

1. the relentlessly rising levels of unemployment

2. the impact on the electability of Labour MPs in marginal constituencies