A ministry of all the talents? 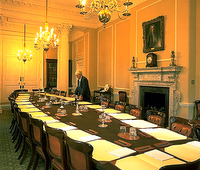 "I would relish the opportunity to take on David Cameron and the Conservative Party. And in that endeavour I would be determined to draw on all the talents of our party and country." So said Gordon Brown in his conference speech on Monday, in what was probably intended more as an "inclusive" gesture to his potential Cabinet rivals than a pledge to bring Tories and Liberal Democrats into a national unity Government.

By complete coincedence, however, the BBC is currently running one of its periodic Fantasy Cabinet games which does indeed give users the right to select a team of 10 drawn from all the major parties.

Mine is predictably left-of-centre in nature, though I have found room for two Lib Dems and two Tories. Gordon Brown gets the premiership of course, as befits the most towering figure in British politics besides Blair, but I've also found room for other leadership hopefuls John Reid, David Miliband and Alan Johnson.

Incidentally the BBC game also allows people to vote for TB. It will be interesting to see how many takers they get after yesterday.

David Miliband is wrong for chancellor - it needs to be Ed Balls. Clinton is right - everything unravels if you've got the wrong person in the job.

As long as Labour insists on keeping Balls somewhere in the Treasury, the economy will be steady and that's one less worry when we seek re-election.

I like Miliband though - perhaps another role can be found for him; retire Ming and put him in the Deputy PM role.

Pity you didn't find room for any women.....

I'm not into tokenism, anonymous. And with the sole exception of the late and great Mo Mowlam, none of the leading women in British politics since the golden era of Barbara Castle, Margaret Thatcher and Shirley Williams have been any damn good.

I meant to add a reply to you as well Snowflake.

Balls has a great mind but he lacks the essential political skills required to be Chancellor at this time. They may come with experience, but at present his style of politics is way too aggressive. People would feel as if he was simply using his superior intellect to steamroller them into submission, not empathise with their problems. I actually think his wife, Yvette Cooper, is a better political prospect in the longer-run. Which will no doubt please the anonymous poster.

An ex PR spiv from Carlton as culture sec ? arrrgh!

Ok so its not the Home office but ,its an area that often suffers from having deadwood dumped there.
Chris Smith was exceptional in being a culture Sec that genuinely had a passion for the role and was widely liked and respected.

The Olympics was won on Jowells watch so I'd stick with her.

Hain! Are you mad?

I'd have Boris Johnson as Foreign Secretary just for the sheer spectacle of it all.

Mine would be mostly Tory (definately including Davis and Hague, and possibly Ken Clarke) but I would definately find a place for Chris Huhne and Kate Hoey.