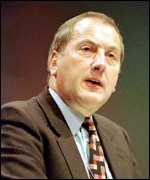 Peter Hain's decision to run for deputy leader while supporting Gordon Brown for the top job is an astute move on his part and should help to further calm the situation at the top of the Labour Party following last week's troubles.

Given the prevailing view among Labour Party members - if not among the Blairite "ultras" - that the party needs to tack slightly to the left on issues such as social justice and constitutional reform - I think a Brown-Hain ticket will be marginally more in tune with mainstream opinion in the party than, say, Reid-Johnson or even Brown-Johnson.

But what few realise about Hain is that he might well have taken a lot longer to get a foot on the political ladder were it not for the unlikely patronage of Labour's forgotten Cabinet minister, Ron Davies.

Prior to the 1997 election, Davies went to see Tony Blair, who was initially sceptical about the former anti-apartheid protester's political abilities, to plead for the Neath MP to be given a job in government.

Over a beer in the Stranger's Bar later - I was the Lobby man for the South Wales Echo at the time - Davies revealed he had told Blair "just how bloody good Peter Hain is."

But the episode had a sting in the tale which had interesting consequences for Welsh Labour politics.

When Labour came to power a few months later, Blair did indeed give Hain a job - as Davies's number two at the Welsh Office in place of his close friend and long-time deputy, Rhodri Morgan.

Nine years on, Hain is on the verge of becoming Labour's deputy leader. Morgan is the First Secretary of Wales. And Davies is no longer even a member of the Labour Party.

I thought you were having a touch of the Guido's for one minute when I saw the title.